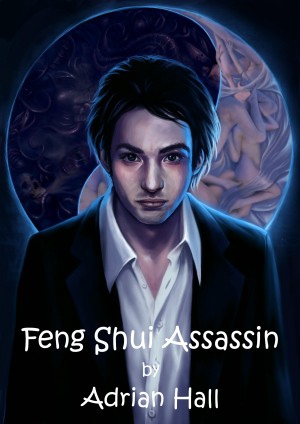 With knowledge and wisdom ch'i can be used for beneficial and fortuitous practice.

Ady Hall - a jack of no trades.

Feng Shui and Assassin are not two words that you would normally associate with each other but the book Feng Shui Assassin gives this concept a good go and brings a new angle to the ancient Chinese believe of Feng Shui. This book is essentially a tale of revenge and reminds me of those classic Hong Kong Wuxia movies, a little silly at times but extremely entertaining to read.

Harvey Barker is the aforementioned assassin in the book and he is killing off the people who are responsible for his sister's death by using Feng Shui. The idea of using Feng Shui to cause death is a neat idea but my only gripe is that the effects happened too damn fast. Harvey managed to cause one of his targets to commit suicide in the space of a few minutes just by offsetting some pictures and paperwork. If Feng Shui is so powerful then there would be many more people winning the lottery instantly because of how they dressed or how their rooms are laid out.

Anyway, Harvey is not the only supernatural killer out there and soon he faces a Yoga master, a hitman with the ability to kill people with his origami objects as well as others. The abilities sound funny but the fight between the Feng Shui assassin and the Yoga master was pretty exciting to read. If you've ever read any Naruto then you definitely have an idea how Chakra is used in the fight scene.

This was a fun read and Hall has done a wonderful job combining mystical arts from a number of different cultures into a highly imaginative story. The story has excellent pacing and never a dull moment. The story is a refreshing change from the magic spells, vampires or werewolves that we see so often in urban fantasy.

I don't know if the author is planning to write any more stories but I'm definitely looking forward to some more.

It is unfortunate that the author did not do a bit of research before tossing around terms like feng shui, karma, etc. As a long time (over 40 years) student of metaphysics, eastern spirituality and related topics, I have never, even once, run across any references to karma spreading over the floor or crawling out of the corners or etc. Or of it ever being activated by a second party practicing feng shui or anything else. Maybe the author has feng shui confused with voodoo or black magic of some kind? As for karma, it is self-generated, an effect created by yourself as cause.
Aside from that(more than slightly distressing) detail, and the need for a proofreader, the book was fairly entertaining. I finished it. The author spins a good tale for the most part and it actually gets better after you are well into the story. May I suggest a proofer and republishing? There's no help for the basic misunderstanding of the nature of feng shui and karma because it is the foundation of the plot, but with sexy (!) vampires and zombies on the loose, why not allow this distortion as well? Three/quarters of a star isn't possible, so I'm rounding up from 3.75 to 4. Direction to author: Keep writing! You have talent! (But please make sure you know your devices next time. It really bothers knowledgeable old fartettes like me.) Meanwhile, thank you for an entertaining few hours.

Feng Shui Assassin is a light-hearted story of holistic murder and New Age mayhem. And that ultimately makes sense. As any witch worth her salt knows, a power that can heal can also harm --- and so, if feng shui can bring good fortune and health, it can also bring ill fortune and death.

So it's only a matter of degree to realize that Harvey Barker, trained in the East ... or at least in Chinatown ... out to avenge the death of his sister, can walk into an office, tilt a picture on the wall, rearrange a few letters and tape dispensors on the desk, and drive the tough businessman who works there to suicide in a matter of minutes.

The police are, of course, baffled. Though Detective Constable Amanda Morgan pursues the case on the thinnest of leads, anyhow, despite being utterly out of her league.

Not, of course, that Barker is the only alternative killer out there. He crosses paths with the Yoga Warrior and the Origami Killer and others. And finally with the ultimate villain: Papa Doc Duvalier, whose scheme to kill everyone in the entire world has one of the most novel and sensible motivations that I have ever read.

Anyhow, it's a fun read, guaranteed to cheer you up on a sickday in between cups of kombucha and ginseng tea. The writing is energetic and serviceable. The characters are all stock characters, or New Age versions thereof, but not annoyingly so. The basic premises of the characters are silly (Feng Shui Assassin, indeed!) but they are taken seriously: the humor never gets in the way of the plot, and never degenerates into silliness. Some of the perils are quite imaginative indeed.

A fast paced adventure, enjoyable to read. Story ends in a cliffhanger, hope there will be a second book.

AN extremely well written novel I thoroughly enjoyed reading. How eerie it was to see another author understand just how the energy of magick can be used for ill as easily as it can be for good. Though this story shows the depths of subtlety in magick not used before. There were many layers of truth in this fictional book which only made the chills crawl more for me. Thanks for the added insights. and thanks for a fascinating fictional story.

Excellent, a real page turner. Original concept, hope this is the first of a series!

I've actually read it twice now, and throughly enjoyed it. Can't wait for the next one!!

You have subscribed to alerts for Adrian Hall.

You have been added to Adrian Hall's favorite list.

You can also sign-up to receive email notifications whenever Adrian Hall releases a new book.