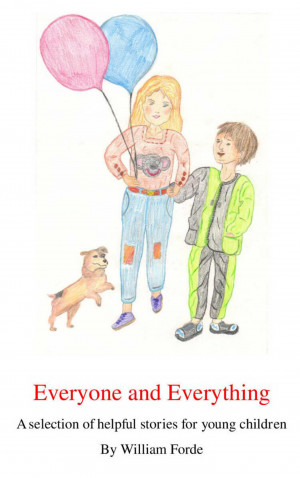 By William Forde
This book contains ten short stories written by William Forde, the founder of Anger Management and a leading Relaxation Trainer in Great Britain for over 50 years. It has been written for the 5-9 year-old reader and provides an ideal 10-minute reading slot fill for children during morning assemblies at school and before going to sleep at night. The stories deal with child problem issues of today. More
In areas of educational, social and moral development, the power of ‘story-telling’ remains unsurpassed. It is an important avenue of effective communication and learning between parent and child; teacher and pupil. ‘Everyone and Everything’ are short punchy stories that maintain the interest of the 5-9 year-old child.

‘Story-telling’ stimulates the imaginative and creative processes of the mind and body and makes more things possible than would otherwise be achieved without it. To storytell about issues concerning behaviour that creates everyday problems for the child reader and which can relate to emotions that the child finds difficult to healthily express is a sure-fire way of grabbing their attention time span.

The ten stories in ‘Everyone and Everything’ were written for the 5-9-year-old reader in 1990. While they helped to raise a lot of money through their sales for ‘Children in Need’ during November, 1990, their true value is that they can greatly assist in the improvement of aggressive and tense behaviours by children today.

I wanted all of the stories I wrote in ‘Everyone and Everything’ to embrace and include the basic principles of Relaxation Training methods and Anger Management aspects of behaviour. As the original founder of ‘Anger Management’ courses in Great Britain during the early 70s and a leading exponent and instructor of Relaxation Training since the age of 22 years, I felt suitably equipped to write about those aspects of behaviour.

‘Everyone and Everything’ was my very first published children’s book and proved so popular with children, class-room teachers and school heads that approximately 4,000 copies were sold within the Kirklees Community during November, 1990 alone.

‘Everyone and Everything’ went on to prove so popular with heads of schools in subsequent years, not only because of the issues the stories raised, but because of their length and language used. They were easy to read and be read to, and for busy head teachers, the stories could be used ideally within a ten-minute morning-assembly slot.

I offer this book freely as an e-book and would advise the school teachers and head teachers of our Primary School Children to consider the merits of reintroducing some of the stories therein to their future school assemblies. I would also ask any downloader of this book who enjoys its content, to promote its readership base and to make a small donation to the Children in Need Appeal next November.

William Forde was born in Ireland and currently lives in Haworth, West Yorkshire with his wife Sheila. He is the father of five children and the author of over 60 published books and two musical plays. Approximately 20 of his books are suitable for the 7-11 year old readers while the remainder are suitable for young persons and adults. Since 2010, all of his new stories have been written for adults under his 'Tales from Portlaw' series of short stories. His website is www.fordefables.co.uk on which all his miscellaneous writings may be freely read. There are also a number of children's audio stories which can be freely heard.

He is unique in the field of contemporary children's authors through the challenging emotional issues and story themes he addresses, preferring to focus upon those emotions that children and adults find most difficult to appropriately express.

One of West Yorkshire's most popular children's authors, Between 1990 and 2002 his books were publicly read in over 2,000 Yorkshire school assemblies by over 800 famous names and celebrities from the realms of Royalty, Film, Stage, Screen, Politics, Church, Sport, etc. The late Princess Diana used to read his earlier books to her then young children, William and Harry and Nelson Mandela once telephoned him to praise an African story book he had written. Others who have supported his works have included three Princesses, three Prime Ministers, two Presidents and numerous Bishops of the realm. A former Chief Inspector of Schools for OFSTED described his writing to the press as 'High quality literature.' He has also written books which are suitable for adults along with a number of crossover books that are suitable for teenagers and adults.

Forever at the forefront of change, at the age of 18 years, William became the youngest Youth Leader and Trade Union Shop Steward in Great Britain. In 1971, He founded Anger Management in Great Britain and freely gave his courses to the world. Within the next two years, Anger Management courses had mushroomed across the English-speaking world. During the mid-70's, he introduced Relaxation Training into H.M. Prisons and between 1970 and 1995, he worked in West Yorkshire as a Probation Officer specialising in Relaxation Training, Anger Management, Stress Management and Assertive Training Group Work.
He retired early on the grounds of ill health in 1995 to further his writing career, which witnessed him working with the Minister of Youth and Culture in Jamaica to establish a trans-Atlantic pen-pal project between 32 primary schools in Falmouth, Jamaica and 32 primary schools in Yorkshire.

William was awarded the MBE in the New Year's Honours List of 1995 for his services to West Yorkshire. He has never sought to materially profit from the publication of his books and writings and has allowed all profit from their sales (approx £200,000) to be given to charity. Since 2013, he was diagnosed with CLL; a terminal condition for which he is currently receiving treatment.

In 2014, William had his very first 'strictly for adult' reader's novel puiblished called‘Rebecca’s Revenge'. This book was first written over twenty years ago and spans the period between the 1950s and the New Millennium. He initially refrained from having it published because of his ‘children’s author credentials and charity work’. He felt that it would have conflicted too adversely with the image which had taken a decade or more to establish with his audience and young person readership. Now, however as he approaches the final years of his life and cares less about his public image, besides no longer writing for children (only short stories for adults since 2010), he feels the time to be appropriate to publish this ‘strictly for adults only’ novel alongside the remainder of his work.

In December 2016 he was diagnosed with skin cancer on his face and two weeks later he was diagnosed with High-grade Lymphoma (Richter’s Transformation from CLL). He was successfully treated during the first half of 2017 and is presently enjoying good health albeit with no effective immune system.

You have subscribed to alerts for William Forde.

You have been added to William Forde's favorite list.

You can also sign-up to receive email notifications whenever William Forde releases a new book.