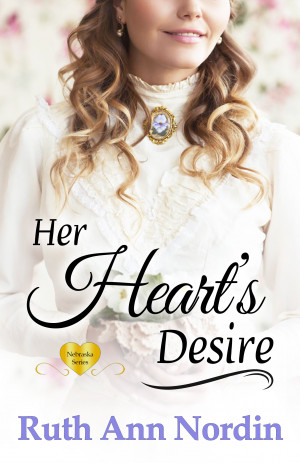 Rated 4.89/5 based on 9 reviews
As soon as Sally Larson meets Rick Johnson, she knows he's the one for her. The catch? He's interested in her friend, Ethel Mae. But Sally has a plan. With Ethel Mae's help, she convinces Rick that the only way he'll get Ethel Mae is to make her jealous. He agrees, but he has a trick or two up his sleeve. Sally just might find that the one playing cat is really the mouse.
Download: epub mobi (Kindle) lrf more
pdb
Price: Free! USD
Add to Library
Create Widget
Tags: romance comedy humor sex historical romance bride nebraska elope virgin hero historical western sally larson
About Ruth Ann Nordin

About the Series: Nebraska Series

Follow the Larson family and their friends as they find their way to a happily ever after with their true love.

Reviews of Her Heart's Desire by Ruth Ann Nordin

I had to create an account just to write a review for this book. It was so cute.
The characters were well rounded and really felt like settlers. The innocent excitement displayed was endearing. I am looking forward to reading more from this author.
Especially if the first one is so good and they will only get better. Also as I was surfing other books from her I seen tutorials and testimonials of her experiences. Guiding others to learn from her bad experiences with publishing and plagiarism. Thank you.
I will certainly purchase other titles from you and recommend you at every opportunity.

Sally has plans, big plans that include a life with Rick Johnson. Now she just has to get Rick to focus on her and not her best friend. The two put their heads together and start scheming. The fun ends with Rick turning the tables.
Adult content

I'm a huge fan of RAN, I have almost all her books... Almost all because I don't like Sci-Fi so I don't have her series in that genre. But all the others? Are in my library and really well read. I'm always on the look-out for her releases and do not hesitate to grab a copy of them once they're out, especially books that relate to the Larsons.

I had always wondered about Sally's story and wondered why RAN hadn't started the series with the eldest of the Larson siblings but I guess Tom was just to cute and inspirational to pass over for Sally and/or Richard. As always RAN delivered and left me waiting for the next book in the series, the eldest Larson sibling, Richard's story. Pick a copy of this book up, trust me you won't regret it...

Sally's personality is very attractive that it makes the whole story interesting.

I want to have a story between Hugh and Vivian!! :)

Rick Johnson wants to court Ethel Mae Jordan. Ethel Mae Jordan does not want to be courted by Rick Johnson so she has her friend, Sally Larson, over when Rick comes calling in hopes that she will want him. Sally immediately sees that she would love to be courted and even marry the handsome Judge Johnson...only if he could see her past Ethel Mae. But Sally's a clever girl and sets out to win her man...Her Heart's Desire.

After reading the previous books in this series and have this book come out as the first one, had me wondering how it would be. It was great. Starting in the past while knowing what the future held for these characters was quite enjoyable. A seventeen-year-old Tom, fourteen-year-old Dave, twelve-year-old Jenny and a nine-year-old Joel...who was the naughty and mischievous youngster we first met in A Bride For Tom. We finally get a good look at Richard and Amanda as well. Vivian Jordan, who not only ended up playing a part in Sally's plan but the poor ten year old had to constantly dodge Hugh, the neighbor boy. If you have not had the opportunity to read any of this series yet...here's where you start. If you go to Ruth's website you will find the order of her books and where to get them as well. A Bride for Tom and A Husband for Margaret are the next two books and they are both free. You will find she writes with humor, romance and lots of good food and family.
**Sexual situations within marriage.
http://justjudysjumbles.blogspot.com/2011/09/ruth-ann-nordin.html