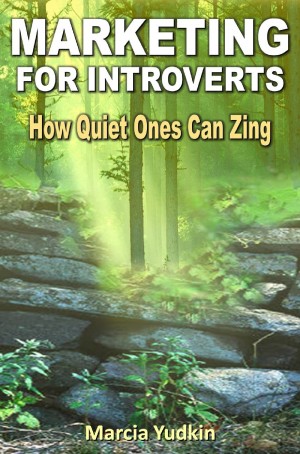 If so, you may have been sold a bunch of malarkey when it comes to bringing in customers. Contrary to the stereotype in our culture, introverts can excel at marketing.

This ebook describes dozens of ways in which introverts can approach networking, publicity, getting published, speaking in public and other common marketing activities while being true to their personality.

A bookworm as a child, author Marcia Yudkin grew up to discover she had a surprising talent for creative marketing. She’s the author of more than a dozen books, including 6 Steps to Free Publicity, now in its third edition, and Persuading People to Buy. She also mentors introverts so they discover their uniquely powerful branding and most comfortable marketing strategies.

Marketing for Introverts was recently highlighted in the Philadelphia Inquirer.

Discover how you too can respect your inborn preferences and still become an ace marketer!

Creative marketing expert Marcia Yudkin has an unparalleled ability to find the right words for a message, an unusual angle to get folks to pay attention, and the promotional strategy that pays off handsomely for her clients.

Her 16 books include 6 Steps to Free Publicity, Persuading on Paper, Web Site Marketing Makeover, Meatier Marketing Copy and Freelance Writing for Magazines & Newspapers, a Book of the Month Club selection.

Marcia’s articles have appeared in hundreds of magazines, including the New York Times Magazine, TWA Ambassador, USAir Magazine and Business 2.0. For eight years running, she served as an official site reviewer for the Webby Awards and has helped judge the Inc. Magazine Small Business Web Awards.

She has been featured in Success Magazine, Entrepreneur, Home Office Computing, Working Woman, Women in Business, dozens of newspapers throughout the world and four times in the Sunday Boston Globe, as well as on National Public Radio.

Marcia Yudkin holds three Ivy League degrees, including a Ph.D. in the humanities.

You have subscribed to alerts for Marcia Yudkin.

You have been added to Marcia Yudkin's favorite list.

You can also sign-up to receive email notifications whenever Marcia Yudkin releases a new book.