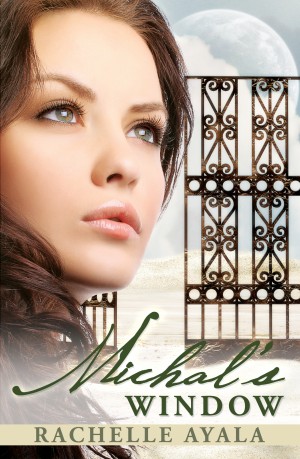 By Rachelle Ayala
Rated 4.33/5 based on 3 reviews
In ancient Israel, where women are property, Princess Michal loves her father's worst enemy, the future King David. She sacrifices everything to save his life, but will her heart survive war and separation?

A novel of betrayal, forbidden love, and redemption, Michal's Window is an imaginative retelling of King David's story through the eyes of the woman who loved him first. More
She lost it all in one agonizing moment...

Princess Michal is used to getting everything she wants, and she has her heart set on the young hero David. But their passionate love affair is destroyed by her father's murderous rage. Will David's departing promises be enough?

David the King is no longer the charming harpist she gave her heart to. The most powerful man in Israel, he falls into the arms of the beautiful Bathsheba.

Temptation comes in the form of a dashing Philistine warrior. Michal vows to be the only woman in David's heart, but does she know her own?

Rachelle Ayala is the author of dramatic romantic suspense and humor-laden, sexy contemporary romances. Her heroines are feisty, her heroes hot. Needless to say, she's very happy with her job.

Rachelle is an active member of online critique group, Critique Circle, and a volunteer for the World Literary Cafe. She is a very happy woman and lives in California with her husband. She has three children and has taught violin and made mountain dulcimers.

I couldn't put the book down and read it on my kindle straight into the evening hours and early morning. It is a long novel, which counted for quite a few breaks in between,. But Michal's Window truly seizes your attention.

In the first chapter, you are filled with emotion and captured with rage, frustration and callous. You realize quickly that the author has taken you through a time warp and you are immersed in the world of ancient Israel, during the times of King Saul, David and Michal. The book is set as Historical Fiction and takes us through the tales of a less spoken voice, the side of Michal that is not necessarily counted or developed in the Biblical tales. The book tries to remain historically accurate with times and ages of the characters, their reactions and responses and some of the "underground" movements of emotion and action. The book does get graphic, so if you mistakenly interpret the novel as a Christian novel of fact, then you will be sorely misinformed.

This is part of what I appreciate about this novel. I'm not into any readings (or news) that is cookie-cutter, appealing to the masses types. I believe books are supposed to inspire thought, individualism and even some controversy. Even the Bible inspires thoughts, forces us to derive choices and show the tribulations, triumphs and distresses of the faithful. I enjoy the author's creation of drama and presence in a book, and this is exactly what Rachelle Ayala offers her readers, with this capturing novel of the life of King David, as seen through the eyes of his "first" wife, Michal.

I really liked the book! I wasn't crazy at first about how long the book was, but when you read it, it doesn't feel long as you find yourself completely engrossed in the story from the very beginning. I admit that much of the characterization didn't match what I had previously thought of King David, but perhaps that's a good thing. I'm planning on reading the actual bible verses mentioned at the end of the book to gain even more understanding. I think I will have a whole new perspective now. I even found myself changing who I was rooting for nearly every other chapter. My favorite characters happened to be Ittai, Phaltiel, and David's second and third wives. But overall, I really liked it and would definitely read another book by the same author.

I will admit it: I am a reading addict. I will give almost any genre a chance and will read pretty much anything put in front of me – I have been that way since I was a kid. When I was given a chance to get a free copy of a Biblical fiction book to review, I jumped at the chance, despite it not being from my usual arena. Michal's Window by Rachelle Ayala is a beautiful story of love, loss and fate – it just so happens to be about King David from the Bible.

What did I think?

The stunning imagery of this book lands you face first in the desert of Jerusalem where you are immediately brought into Ms. Ayala’s interpretation of this male dominated, God-fearing world. This Biblical fiction book is a retelling of King David’s relationship with his first wife, Michal, daughter of Saul. The story begins when the two meet as young teenagers (yes, they are young – but stick with it and remember the time from which this story is told – 14 was not too young to marry at the time…).


The story unfolds with King Saul’s deteriorating mind and the lunacy that follows, including his exile of, and attempted execution of David after David marries Saul’s favorite daughter. You cannot help but feel like you are part of this world and feel each of Michal’s emotions as she pines for David following his exile, despite her being remarried to a kind, generous soul, Phalti. Throughout the story, we meet family, friends, lovers and even a sorceress – that aid Michal in her attempt to reunite with David.

I wept with Michal when she lost her first child, and again when David came to claim her as his queen. The passion between these two was palpable and really did swing as a pendulum between infatuation and hate. This pent up emotion plays out in their bedchamber, too, with well-written and somewhat saucy love scenes.

It was fascinating to imagine along with Ms. Ayala how these people would have acted and what they would say in certain circumstances, given the time. I loved getting a “behind the scenes” glance at King David and his many wives. It was interesting to see how these women were not simply the “follow because I am told to by a man” types, but more often presented that way, while at the same time, used their sexuality to try to gain the upper hand. Michal was a strong, stubborn woman who struggled with knowing what she should be doing and what she wanted to do. I loved watching her grow and learn to trust herself, no matter the consequence. So many books have a “Team” for whom you pledge your allegiance to for the heroine to become involved. With this book, it was very Mr. Right Now, versus Mr. Right. Phalti, Ittai and David each had a place in her heart and a time in her life. At different times, I loved and hated each.

I loved this book. It highlights a young woman, who in many ways, was ahead of her time. She was outspoken, fought for her love and was fearless. She was not afraid to make decisions that were right for not only herself, but for her family, even if it meant her heart was broken in the process. I would recommend this book to anyone – not just those interested in Biblical fiction – but those interested in a story of epic love, political discord and self worth.

You have subscribed to alerts for Rachelle Ayala.

You have been added to Rachelle Ayala's favorite list.

You can also sign-up to receive email notifications whenever Rachelle Ayala releases a new book.