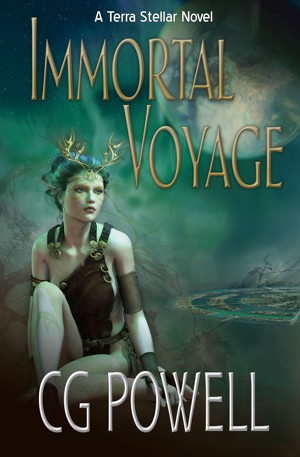 What secrets would you keep to save your kingdom? On the Queen’s deathbed, the sonless King Aldric is force into a promise to allow his five daughters to marry for love. A promise he wished he had never made, and one he will have to break, to save the kingdom from his squabbling, incompetent son-in-laws.

The youngest of five daughters, Jael, spent most of her time at her father’s side learning to run a kingdom. Believed to be the King’s favorite, Jael is shocked when he betroths her to a longtime friend of his, Prince Sarik of Hy-Brasil. Soon she will learn that world is full of secrets and one of them is her very own birth. Will the secret that bonds her to Sarik be the ultimate downfall of a kingdom?
Available ebook formats: epub mobi pdf rtf lrf pdb txt html
First 20% Sample: epub mobi (Kindle) Online Reader
Price: $2.99 USD
Buy Add to Library Give as a Gift
How gifting works
Create Widget
Tags: romance fantasy ireland aliens space mythology atlantis jinn cg powell spell checked immortal voyage hybrasil
About C.G. Powell

Christine Powell Gomez (AKA- CG Powell) started writing in 2011, after much consideration, she decided that indie pubbing was the direction for her. Since then she has never looked back, Christine has written books and short stories in the paranormal, science fiction, fantasy, and erotica genres all with a twist of romance.

Before self-publishing, she worked a plethora of jobs that only enforce her love of the written word such as: her adventures in the Navy, working for the USDA in the sugar cane fields of south Louisiana, Cisco Networking (CCNA), working for the French Air Force as a technical advisor on electronic parts and becoming a (GIA) Gemologist. Christine has taken her vast knowledge and insatiable appetite for learning and applied it to the stories she writes.

In 2012 Christine opened The Book Swag Shop, which caters to indie authors looking for unique swag items for their fans. This venture has helped her to understand branding, time management (still working on this one), and business management. It has also enabled her to meet other authors outside her usual circles.

Immortal Voyage
Before the time of the great pyramids, there was a place like none other. A city of glass and metal rising from the depths of the ocean—Atlantis, home to a race of long lived interstellar nomads. Can humanity survive the havoc that will rain down on them when secrets, lies, and love are involved and their two worlds collide? IMMORTAL VOYAGE

About the Series: Terra Stellar

A great fantasy novel that blends fairy tale with mythology. I highly recommend it to anyone that enjoys a good fantasy that is fast paced and hard to put down.

This book is very different from anything I’ve read to date. Set on Earth, it’s an Earth that is barely recognizable to what we’re familiar with as its set ages upon ages ago. We start off from a human’s point of view, but are quickly introduced to aliens and shown that there will be plenty of interaction as we follow several different characters. There’s a mystery about the book that lasts well into late chapters, surrounding who is what and all the relationships. It’s all very intricately woven.

What’s even cooler about this book is all the mythology that’s included. I am itching to gush about all the references made, but that would ruin the fun y’all can have when you go read it. The last page is the best though in terms of weaving the different mythologies together!

For several chapters I was disappointed with the characters, feeling they were fickle in their affections, but it’s all explained later, so I was able to let that go and enjoy the characters more, thankfully. What I didn’t like was that sometimes things felt a little rushed. The passage of time was a little confusing at times, but overall you’re still able to catch up quickly and fall back into the moment. The only particular problem I had that was ongoing was that I felt the editing could have been better. There were extra words and incorrect words scatter throughout which made it difficult to keep a smooth flowing read through, but if you can recognize and keep up with those, it’s really a neat and touching story.

At Jael's birth, her mother's dying wish was that her daughters would be able to marry for love and not for political wrangling. Jael is the fifth daughter, her parents didn't have sons. Her father did not have a clear cut case of who would inherit at his death.

Seventeen years later, the lairdship is in danger. The first two daughters chose their husband's poorly. As a drastic measure, Jael's father arranges her marriage, breaking his death bead promise.

There are many secrets that have been kept, the threat of having them come in the open would be dangerous and devastating. Jael must make the decision to follow her father's decision, or risk war with the other lands around her home.

This book is craftily written. It took me a while to figure out the time period and where the story may have taken place on Earth. There are so many mythical characters and a sci-fi element as well. I don't want to say much on the subject, because if you plan on reading this, I want to you to figure it out for yourself. :)

There is the 'f' bomb dropped a few times and sexual situations. I recommend this book only to adults.

C.G. Powell has taken a very interesting perspective in the city of Atlantis in this story about how aliens and humans can co-exist. The truth about Atlantis is a secret though, so shhhhh! This story is primarily about a family who rules a portion of the world called Eir. The queen dies during childbirth of their fifth baby girl, but leaves behind no sons. As her last dying wish, she makes the King promise to let their daughters marry for love. It's a pretty big deal since now the king has to rely on a daughter to marry a man who is capable of running the kingdom without getting to groom him for the position. It is entirely possible each daughter would marry someone completely incapable of being the next king, but he swears to her as she dies that they will marry for love.

Seventeen years later, the king has married off two daughters and one has married a man that could rule, but no one wants him in a position of power. The other appears to be a complete idiot whom no knows much about at all. King Rowe is on a mission to marry off the other three as he is getting older in age. During this time he has had the chance to groom one man to take over in hopes that one of his daughters would indeed fall in love with him. It's a gamble that you will definitely enjoy reading about. His other chance of leaving the kingdom with an heir is to break his dying wife's wish and betroth Jael, the youngest. You will learn that Jael is different from her sisters and Rowe has a very good reason for the betrothal other than finding an heir. It's a mystery that has surrounded Jael since her birth and will leave you shocked at the end. Rest assured that the story has a happy ending and leaves an opening for a second book. I thoroughly enjoyed this and even though I typically avoid aliens, this is well worth the read. Especially since it is C.G. Powell, an author I thoroughly enjoy.

I fell in love with this book at page 40. Jael reminded me of my determination and extreme independence that I had at 18 (although I have to say i have never had a romantic interlude in space, I wish!) One of my favorite parts of this book is how MANY characters C.G Powell juggles in this story. There are two main characters, Jael and Salik, but the book is from pretty much every major characters perspective. Lenni and Tam's story was my favorite. It was by far the best love story in this book. AND it has Atlantis, interstellar beings and magic. My three favorite things. I really hope that C.G writes a lot more stories for these characters. I will read them all!

You have subscribed to alerts for C.G. Powell.

You have been added to C.G. Powell's favorite list.

You can also sign-up to receive email notifications whenever C.G. Powell releases a new book.