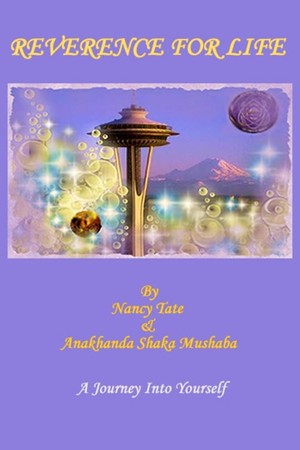 By Nancy Tate
Nancy Tate and Anakhanda Shaka Mushaba each contributed to the book in a total of four chapters a week, over four weeks. The writings were delivered through their ability to channel information from Mushaba and other Light Beings. This book is full of promise for mankind and is written in story form. It holds awe-inspiring information designed to awaken parts of your inner memory. More
Greetings Dear Wonderful Souls of Humanity! I welcome you with great expectation and excitement of your involvement and appreciation for all that life has to offer. It is with great pleasure that I come before you today to bring you the news of the reverence for life! You will be the story that is being written and each of you that participate will tell the story before it is written! Prepare to go on a journey of your choosing that will be embraced with love and truth that will support you and hold you firm in your commitment to self-discovery.

As you all know there is no chance that you can get up in the morning and find that there is nothing to do. There is always something to do and someone to do it with, even if it is your cat, dog, bird or your other self. Yes, your other self is as willing, or possibly even more so, to do something with you.

So as you arise and face the day, do so with a smile and a sense of adventure, for that is what this all is, my dears, this is one big adventure that can bring about a reverence for life as solid and fragile as anything that can come into your life. This is what I was told and I am going to stay around until I can prove it to myself on a level that manifests itself in my life. Heaven knows I can work on that.

Together we will weave a wonderful journey that will take you to the discovery of yourself!

Nancy Tate grew up in Stratton ME, lived in Ill and MA, then back in Stratton, before moving to the Southwest in the fall of 1995. She has two daughters and eight grandchildren, all of whom live in ME.

Nancy began her writing career after coming to the Southwest. The Menorah is her first formal publication, followed by Grandmother Ellie’s Attic. She has written poetry, children’s and short stories, ebooks and is writing another novel. In 1997 she created and released her first of several CDs, Dance of Remembrance, a meditative collection of some of her poetry that she reads to music.

Nancy has a spiritual website, The Tree of the Golden Light, www.treeofthegoldenlight.com, a multi-faceted site, was created in the spring of 2002, and has reached a readership of well over 4 million, appealing to an International audience. Nancy channels many lighted beings and posts the Wake up Call messages to her mailing list and on the website. She also features books, e-books, CDs and more.

Nancy lived in Bisbee AZ for five years, which is where she met her life partner, Bob Towers, and their beloved dog Toshiro. They traveled on the road in their RV for three years, then lived in a Dome home in Tucson AZ for two years, in Mount Shasta CA. for a year, and in Santa Fe NM for a year. They moved to Hereford AZ, in August 2013, and will be moving to Patagonia AZ on Sept 10, 2014. Their dog Toshiro passed in Sept 2012, and he is reincarnated in their new beloved dog Cassie.

Review
Paulette Redburn reviewed on on Sep. 12, 2012
(no rating)
I'm not finished reading it yet. I bought "Reverence For Life" by Nancy Tate.
I like the simplicity of buying e-books with smashwords

I've been busy with a course by Master Sananda.

You have subscribed to alerts for Nancy Tate.

You have been added to Nancy Tate's favorite list.

You can also sign-up to receive email notifications whenever Nancy Tate releases a new book.