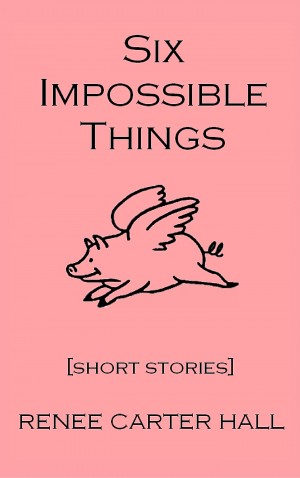 Renee Carter Hall writes fantasy and soft science fiction, with excursions into dark fantasy, poetry, and stories for children and teens. Talking animals slip into her stories whenever they get a chance, and her work has been influenced by storytellers from a range of media, including Steven Spielberg, Ray Bradbury, and Jim Henson. Her short stories have appeared in numerous print, electronic, and audio publications, and her most recent book, the anthropomorphic fantasy Huntress, received the 2014 Cóyotl Award for Best Novella.

Renee lives in West Virginia with her husband, their cat, and more books than she will ever have time to read. She can be found online at www.reneecarterhall.com and on Twitter as @RCarterHall.

All the stores are a really good.

While taking a break from creating worlds, I decided to peruse others’ creations. Being frugal by both nature and necessity (Insert your own comment about the provincial government here) I was delighted to find an e-book by acclaimed author Renee Carter Hall, a fellow FWG member.

First things first, this is a FREE EBook, available on Smashwords for download.

Do I recommend it? If you are looking for a collection of short stories and flash fiction that can act as literary Prozac, then $#@! Yes, I recommend this collection. Not only is it well written, the characters feel alive, are relatable, and each story is just long enough to give you an impact in the feels, or just enough of a break to help relax you emotionally before the next big hit. Each story can be quickly read through, and some are just a single page, quick enough to skim over while sitting on the can. (Hey! Don’t judge. At least I don’t do Sudoku there) Best of all, the stories are clean. There is no gore for shock value, and the little nudity is natural, not thrown in for simple titillation.
I would feel more than safe handing this collection to a middle-grade class

Is there any flaw with the overall collection? I had a small bone to nitpick on, but it’s so slight who really cares? There is an occasional word repeated so close together, either in the same sentence or next, where a glance at a thesaurus could have easily one without losing meaning, for example, “The white one was so white that it almost glowed.”, but it happens so infrequently I’m certain it is just me being a stick-in-the-mud.

So, now I’m going to dive in a little further. For starters, the cover. It is simple, easy, looks inexpensive, but it’s a joke on its own. The single, tiny piece of artwork fits the mood, and considering the price you’re paying for it, it’s more than we deserve.

The first story revolves around a father, who’s nervous and anxious for reasons anyone who has ever had a child would be. I instantly connected with the character, and I felt his pain. It brought back memories to me of waiting when you want to see your child, know they are alright, needing to protect them, but know that you have to put their lives, and your faith, in someone else, and just wait.

I almost put the book down right there, not because of the story, but because I felt the anxiety. Relief comes in something beautiful, a childhood friend in a long forgotten comfort, and just like the main character, I became more relaxed, able to continue, able to enjoy and remember, forever briefly, visits to Narnia or Eamon with my siblings, escapes to my own worlds, losing myself in childhood fantasies, that as an adult, I wish I could escape to.

For the second story, Renee switches genders, bringing a lonely lady to the forefront. I worried briefly when I read that she wrote poetry, and thought that the author may just be pretentious enough to toss in a main character who is an author. I LOATHE when story-tellers do that. It feels like a selfie, a form of personal gratification. That, thankfully, was not the case.

A simply cast spell to call for love has unexpected results. This one is fun, charming, and in the end, predictable, but that’s part of the goodness of this short. It made me smile, gave me what I expected, and left me satisfied.

The next short is a flash fiction, a single page long, and a break from happiness. It’s exactly where it needs to be. A woman at a banal job as a Walmart greeter unwittingly allows the four horsemen of the apocalypse into the store, and that’s it. She takes note of them from time to time, and I wondered what was going to happen. The end leaves you wondering if it was a final fling before the destruction of humanity or just a day in their lives. It’s quick, easy, and exactly long enough to break for the next, which helped to make Swear Not by the Moon all the more poignant.

Swear Not By The Moon. My favorite in this collection. A son cares for his ailing father, who was once the strongest and proudest of his kind. You can tell there is love between them, and its sorrowful look at aging was only part of what kept me going.

This is an example of what a short story should be. It’s small enough to read through, to get the characters, to have a beginning and an end that both touch your heart in different ways, but the WORLD, the lore, could be expanded into a full novel, adventures could be had, such a universe is created, and yet, you realize, that’s it, there doesn’t need to be a single word more written. You understand it all, but you WANT more all the same.

Drawn from memory might seem peculiar to some. It’s not unlike Who Framed Roger Rabbit. The world itself is easy to understand, and the story is bittersweet, but triumphant. If I had to choose a blemish though, it would be in the romance that develops. I always find it odd when a father or mentor figure becomes an intimate partner. It always strikes me as a marrying your uncle scenario, but the story is good, and considering that its lead narrator is a fangirl and I’m a guy, I could be missing something. Strangely enough, I didn’t laugh where I thought I should, instead, I found the moments all touched by grief and tenderness. It would be a good story to read when coping with the loss of something precious.

Lastly, Renee concludes her collection with another Flash. It is brief, and the story is simple. A young girl begins a task, continues it when it seems fruitless, stubbornly obsessed with her actions, but the ending makes it all worth it. You too, feel both relief, understanding, and satisfaction at the conclusion.

In short, this anthology is going straight onto my digital bookshelf. I’m keeping a PDF on my hard drive from now on, and I encourage you to check it out too. It’s a good book, short, simple, sweet, and just what might be needed to lift your spirits or remind you that magical moments do exist.

I loved every story in this collection! The characters are well written and the plots are perfectly "logical" even within a fantasy framework.

Stellar in every way, it's a crime that Renee isn't charging for these stories. Each one is vibrant and beautiful, emotional, whimsical and funny. The stories include "Childish Things" about a new father visited by his childhood imaginary friend when his newborn daughter is struggling in a hospital. "Moon, June, Raccoon", a story about a young woman desperately seeking love and how an attempt at magic brings her a witty raccoon matchmaker. And "Swear Not by the Moon" which examines a father and son relationship and having to deal with the fact that everyone grows old and dies--even werewolves. A fantastic collection everyone should read.

(review of free book)
Cynthia Douglas reviewed on June 6, 2012
(no rating)
This author truely has a unique view. I found these stories entertaining and thought provoking.

The birdseed story brought back a simiilar childhoood memory

I didn't enjoy all of these stories, though Kris was pretty darn entertaining. I especially liked the imaginary friend story. The cartoon character one...freaked me out a little as I was (and still) not prepared to think about them that way.

Pretty good though, it was a nice way to spend my evening.

Every story in this collection is top notch. Truly excellent.

You have subscribed to alerts for Renee Carter Hall.

You have been added to Renee Carter Hall's favorite list.

You can also sign-up to receive email notifications whenever Renee Carter Hall releases a new book.