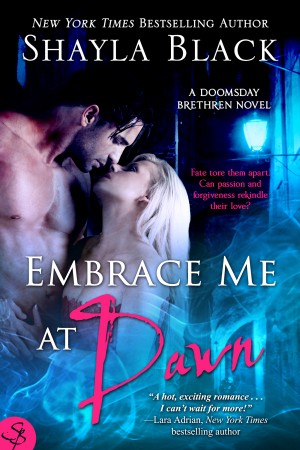 Embrace Me At Dawn

Fate tore them apart. Can passion and forgiveness rekindle their love? More
No man will ever define her again.

Anka MacTavish lost everything when Mathias D’Arc captured her, shattered her bond with her mate, and broke both her body and spirit. Determined to heal her bleeding soul, she joins the Doomsday Brethren’s fight to vanquish the evil wizard and seize her revenge. But becoming a magical warrior will require close contact with her former mate, the love who’s never left her heart, Lucan. And she’ll have to explain why she left him and fled to the arms of another lover…

No woman can ever take her place.

Lucan’s world crumbled when Anka escaped Mathias and sought protection from his long-time rival, Shock. Now she has returned, and Lucan must train her to confront a new and terrible danger that threatens magickind. With every punch, blow, and parry, Lucan discovers that Anka isn’t the demure wife he once knew, and his reawakening desire for this woman is a need he can’t control. He vows to do whatever it takes to reclaim her heart and make her his once more. But when the Doomsday Brethren are forced to make an unlikely alliance, it will test Anka’s resolve like never before. To survive, she and Lucan must rely on one another, face their deepest fears…and expose the dark secrets that threaten to destroy everything, including their love.

Not where I was expecting it to go, but still fabulous!! I can't wait for more in this series.

I can now see why this book took a while to come out. Lucan's story, I think may have been the hardest to write because of so much history between the two characters. The entire series is so well written that I get lost instantly in each book. I only come up for air when the final page is turned. She doesn't leave you hanging with respect to the previous relationships, you hear about all of the previous characters and the magickind saga. I can't say enough good things about this series. I'm sad that, at most, there are only going to be two books left - Bram's and Shock's. I have gained a new love for Shock. I can not wait for that book, it's sure to be a scorcher.

LOVED it!!! So happy to finally get Anka and Lucan's Story! Lucan has always been one of my favorites :) I love all the books in this series but this is definitely the best!

Oh it was sooo good. *happy sigh* I want to read it again. I´ve been waiting for Anka and Lucan´s story since they were separated by Mathias cruelty.

The last book ended with Morganna running wild and the triangle with Anka, Shock and Lucan.
Now we start off with Anka wanting her revenge and to joing the Brethren in the fight, of course both Shock and Lucan disagree, they don´t want her near any threat but fate has her own way.
To get rid of Morganna, Merlin has left a potion, but to find it they need three key players, a descendant of Nimue, a blood relative of Merlin and a banshee who´s a mother.
Mathias is Nimues descendant, Bram is Merlin´s and Anka has a secret that is about to come to light.

Wow, this was such a roller coaster, so many feelings. You just don´t know how this will end, twists appear and troubles tormenting them. Just when you think you know, something new comes along and nothing is solved until the last pages. Loved it, and now i can´t wait to see the next installment in the series.

footnote: the only thing that has bothered me since the beginning, and that i´ve learned not to think about, is that Anka means Duck in swedish. =D

It was GREAT! I love this book! It was worth the wait hopefully she will not make us wait forever for the next one!

This was a great book, glad to see Lucan and Anka back together! I love how strong her character is and how she make Lucan she how different she is in some ways.

(reviewed 22 days after purchase)
Jan Bergen reviewed on May 31, 2012
(no rating)
Can't wait to read this book but, I can go through the process of downloading the book Embrace Me at Dawn but, when I open it, there is nothing there. I have a Mac laptop, it will not accept my download. Not sure what to do, frustrated is an understatement.