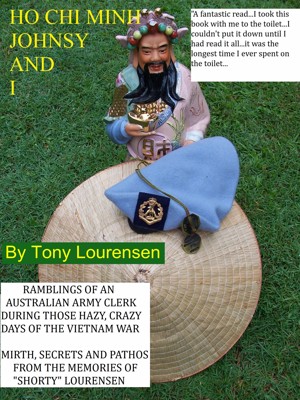 Ho Chi Minh, Johnsy and I

By Tony Lourensen
Follow "Shorty" an Australian soldier, on his tour of duty in the war in Vietnam. No blood, gore or guts in this work - just a collection of simple,fascinating and quirky stories that could only come from one who was there. A soldier's experiences of the ridiculous events and situations in which he found himself. He survives to return to a hostile land and questions himself as to his involvement More
Biographical account of “Shorty”, a young married soldier, just before and during his tour of duty in “Sunny Vietnam”. He spends a great deal of time in preparation for going overseas to help prevent the spread of communism. He wants to get over there before the huge American juggernaut plows through Vietnam and there is nothing more to do. It is 1966.

Circumstances find him being transferred to an Army Aviation group, hence further training in jungle warfare. It is here he teams up with Johnsy, a young and wild soldier and both become mates - a mateship that endures through the hard times ahead. Follow them on a hysterical romp from Brisbane, through Sydney, Philippines the QANTAS pilots went on strike in mid-air and chucked us off in Manila, then Saigon, and to their final destination, the Australian Task Force base at Nui Dat.

Shorty describes everyday life in the camp and explains that even though he is only a “baggy-arse clerk” – he still has his stories to tell. So follows a collection of wonderful and bizarre tales, described graphically and in the vernacular of the day.

Some stories contain: the absurd, “we had a 105mm Howitzer, but no-one knew how to work it, so we had to learn from a user manual”: the ridiculous, “I was looking directly at a landmine outside my tent – on it, I read ‘face toward enemy’”: the pathetic, small children scrambling for work, filling sandbags for a few cents each, a side-splitting story of McGee, a soldier who was overwhelmed by the American “free stuff” and could not help but help himself to it, the informative, Shorty meets an American soldier who was involved in the Bay of Pigs fiasco and reveals his fascinating secrets, the intensive, Tet “the first offensive”, and the disturbing story “Home, Sweet Hamlet” where Shorty is exposed to the lives of innocent peasants, discusses guerilla warfare and the practice of relocating villages.

This last story gives an insight into Shorty’s mind frame where he confesses that he was on the road to “cynical paranoia” and the remainder of the stories become somewhat somber. Yet even through all that, the Aussie humour still shines through.

On his trip home, he questions himself as to what he has achieved, the state of the nation’s opposition to the Vietnam war in Australia, and the insult that “we were advised by our own government, not to wear our uniform on the streets in Australia”. He resolved to forget all and get on with his life – until he saw “a fat, whingy and whiney brat with soft serve ice-cream dribbling down his chin, he was hitting his mother and obviously thoroughly spoilt.” Shorty had a flashback of the forlorn children of the sandbag farm and he experienced a nefarious compulsion to “throttle the little shit to death – that would even things out a bit; at this point I knew I was carrying some baggage that the customs man had not seen – and it was in my head.”
Available ebook formats: epub mobi pdf rtf lrf pdb txt html
First 20% Sample: epub mobi (Kindle) lrf more Online Reader
pdb
Price: $2.99 USD
Buy Add to Library Give as a Gift
How gifting works
Create Widget
Tags: vietnam war military humor bay of pigs military life army aviation army life australian army australian soldiers tour of duty aussies at war military stories
About Tony Lourensen

I was a boat person who immigrated to Australia in 1952. I wasn't called a boat person then, I was called a wop, dago, spick and wog and not all that welcome by the average Australian - seems I was a threat, in that I was here to steal their jobs and their women, a hard task at age 6. I came home from my first day at a Newcastle school with bruises on arms, legs and buttocks, compliments of the teacher who was angry that I did not know the words to GOD SAVE THE QUEEN. Fifteen years later, I found myself in a hole in the ground, in the middle of a war, in the middle of South Vietnam. I had my life on the line, protecting the country which did not want me. I was now an Australian soldier - and I reckoned Australia was worth fighting for. One doesn't need true-blue blood to be an ANZAC.

You have subscribed to alerts for Tony Lourensen.

You have been added to Tony Lourensen's favorite list.

You can also sign-up to receive email notifications whenever Tony Lourensen releases a new book.