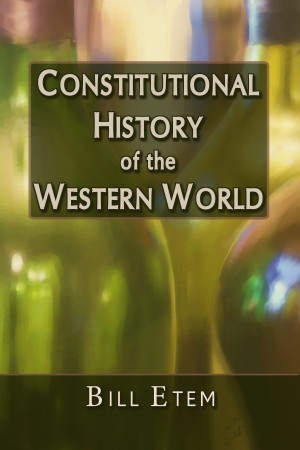 Constitutional History of the Western World

By Bill Etem
Rated 4.00/5 based on 1 reviews
The Roman Catholic crucifix is an image of a Roman Catholic version of Jesus, a version who says Rome leads people to heaven. If the True God / True Jesus says Rome is lost in heresy and leads people to perdition, then an image of a version of Jesus who says Rome leads people to heaven is a lie. If the crucifix is an image of a lie, then the image of the beast, Revelation 14. 11, comes to mind. More
2 Thess 2 says the Antichrist will be revealed prior to the Second Coming of Christ. Revelation 14. 6-11 says 3 angels from heaven will show up before the Second Coming. My religious books push a theory which says the great tribulation - see Revelation 18 for more info about this - revolves mostly round an issue with the cross.

The Devil's side / the Antichrist's side will push one theory about the cross. The 3 angels from heaven, Revelation 14. 6-11, will push a different theory.

The anti-cross side says that all of the evils perpetrated over the centuries by people carrying crosses are reflected in the cross, rather as the evils of the Nazis are reflected in the Nazi swastika, and so the cross is evil, and is therefore, most likely, the mark of beast. Revelation 14. 11 says one burns in hell forever if one puts the mark of the beast on his forehead.

The strongest arguments on the anti-cross side say, 1) Lots of evil was perpetrated over the centuries by people carrying crosses, and, 2) You will never be cast into eternal hell for the sin of having an evil mark on your forehead if you have no mark whatsoever on your forehead.

Christianity is divided and subdivided into thousands of churches. You want to find God's True Church, the Church which Christ founded on a rock. One needs the guidance of the True Church on lots of issues besides the cross in order to attain heaven and to escape perdition, recall 1 Corinthians 11. 27-29.

Of course every church claims it leads people to heaven. No church brags that it drags souls down to eternal perdition!

Mostly likely what will happen, when the Antichrist shows up, and when the 3 angels from heaven show up, is that these thousands of Christian churches which confuse matters with their conflicting doctrines will be transformed, changed in such a way that thousands of churches will vanish. But 2 churches will not vanish. There will be the church run by the Antichrist, a rather satanic church indeed! And there will be the Church pushed by these 3 angels from heaven, the 3 angels mentioned in Revelation 14. 6-11, and this Church will be God's True Church.

So, instead of having to locate God's True Church from amid thousands of churches, as is our current predicament, in the future we might only have to choose between 2 choices.
Download: epub mobi (Kindle) pdf more Online Reader
lrf pdb txt
Price: Free! USD
Add to Library
Create Widget
Tags: christianity israel antichrist islam judaism catholicism true faith jihad true church zionism
About Bill Etem

My nonfiction is all about Christianity.

A huge document that I use as an encyclopedia rather than a cover to cover read. Word count is boosted by a large number of quotes but this works well as it builds confidence in me that I am getting not just Bill's opionion but that of many differnt and varied people.
4 stars for sheer volume and amount of useful info presented. 5 stars if there were internal hyperlinks to help navigate the near 1000 pages.