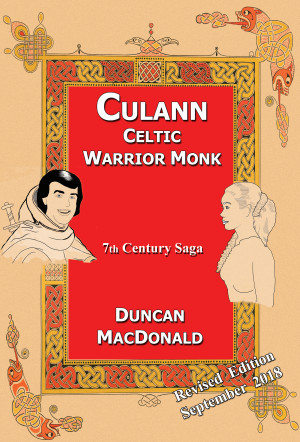 Also in Series: The Culann Chronicles

Good read. Liked references as it made it easier to understand a period of which little is known. Illustrations first class. Helped me to visualize how people lived in those days. Ripping yarn.

(review of free book)
Peter Nicholas Farrell reviewed on Sep. 8, 2013
(no rating)
Afraid I couldn't get into the book. A great plot idea, a warrior monk, but it read too much like a school text book. Far too many explanations for me.

(review of free book)
Richard Tomlins reviewed on June 24, 2012
(no rating)
“Culann Warrior Monk” by Duncan MacDonald
A Review:
I picked up the book curious at the contradictory Warrior and Monk terms and particularly the setting in the early history of Picts and Celts which I knew nothing about.
The book has been well researched from what must have been relatively sparse formal historical records. The difficult lifestyle in often miserable weather has been well intermingled and described as background to an interesting storyline of romance, skulduggery, deceit, suspicion and religious conflict at the time. Why the Picts and Celts chose to settle in such cold, rugged, unwelcoming parts of England and Ireland is still not clear to me apart from the defence advantages. Who else would want it?
What was well described was the devious scheming, bitterness and aggression of the religious divide at the time and the paucity of rational conflict resolution. The lack of good will and compassion between religious sects and communities ensured life revolved around conflict irrespective of the ongoing difficulty of just day to day living and survival. Religious advantage and territorial advantage was the only objective. Perhaps nothing new there.
Culann was up to his neck in it especially after being initially rejected by his true love and forlornly becoming a monk. Culann then had an amazing journey filled with adversity, fights and rewards through unwelcoming parts of this harsh country. Hardly monk- like behaviour.
Impoverished characters and villages plus extremely basic living conditions showed just how tough life was for the Picts and Celts. Even so, matters of the heart and fighting and scheming still took precedence over adversity.
Culann was really more of a warrior than a monk.
A good read and learned a lot. Life is better these days! 4.5 / 5.

This was an extremely easy to read novel. Based on actual recorded historical events and with many recorded historical figures of the time included. I thoroughly enjoyed the read and as I read I gained knowledge about an important time in our history that I now realise I knew precious little about. I would recommend this to anyone who wishes to enhance their knowledge of our heritage, land and religions. The author has a rather dry humour which can be picked up as one passes from page 1 to page 154.