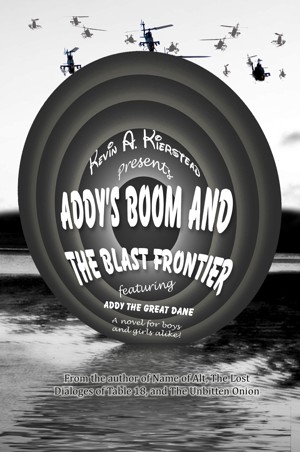 Addy's Boom and the Blast Frontier

Rated 5.00/5 based on 1 reviews
Follow an average man on an exciting journey that he is thrown into with no warning, as he meets and adopts a Great Dane after a "natural" disaster. Are the Chinese invading America? Will he be able to keep his dark secret from the others in their fight for survival? This SHTF (shi* hits the fan) scenario is guaranteed to be one of the fastest paced novels you have ever read! More
Marvin Haskin (Boom) was finally getting comfortable in life. He had learned how to dismiss his troubles, large and small. He came to believe that he didn't matter much, and that nothing else really did, either.

But the same river of unpredictable-turned-mundane events that had shaped his more callous outlook on life was unwittingly preparing him for the ugliest horrors his new world had to offer. Fate had delivered him from his home in Maryland to the small town of Mathews County, Virginia--a fate that should have already seen him dead.

When natural disasters fail to take him, and war, hunger, and thoughts of giving up can’t put him away, he learns that life is not predictable and when he finds himself in a fight for the lives of three new friends, he begins to identify a much larger picture than he ever imagined; of thinking bigger than himself, being ignorant of odds, and being certain that no matter what happened, he was in the right place with the right friends, and the right dog.

Born in Ft. Wayne, IN and raised in southeastern VA, Kevin A. Kierstead was published by the age of 10 (editorial). After graduating high school in 1990, he joined the U.S.A.F. for four years while being published as the feature and sports writer for the North Pole Independent Newspaper, securing an exclusive interview with a new gold and silver Olympic medalist, Tommy Moe. He also finished his first fiction novel during his military service.

He later studied at Christopher Newport University, majoring in Psychology and English with a writing concentration, 1996-99, 2002-04.

He believes it hasn't all been done, and that everybody has a story to tell. He believes that rules and constraints must often be scrutinized and tested. His genres vary, including science-fiction, humor, and suspense thrillers. He hopes to sign with a major publishing house but is also entirely content as long as his readers are satisfied.

This book was marvelously written, I picked it up and just couldn't put it down, cover to cover in 2 hours. It instantly drew me in and captured my heart. The main character digs to the roots of life and shows throughout the novel the reality of the ups and downs of life, all of the characters are precisely written to testify to each of the sides of human nature and our desire despite ourselves to survive. I have read this book several times now and each time I dive back into this world I find something I missed, a detail that brings the story more depth. This book is a definite must have for any reader.

You have subscribed to alerts for Kevin Kierstead.

You have been added to Kevin Kierstead's favorite list.

You can also sign-up to receive email notifications whenever Kevin Kierstead releases a new book.