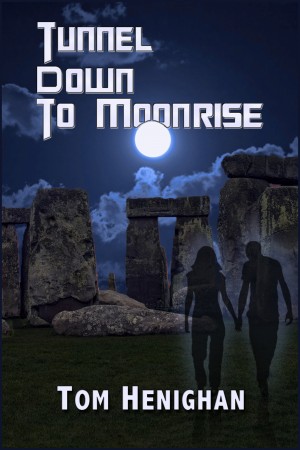 Tunnel Down to Moonrise

By Tom Henighan
Jack Toland, a cool seventeen-year-old, is ready for a family holiday in England when his father (a crusading TV scientist) disappears. Jack’s father has been spirited away by a group of renegade scientists and thugs who have discovered a means of time-travel, and Jack and his dazzling new friend Cleo must travel to ancient Stonehenge to try to find him. More
Jack Toland, 17, has traveled to England with his mother, Cara Peters, who plays “Montana Black” in a well-known TV adventure series. They are to meet Jack’s father, Dr. Charles Toland, a “TV scientist” who has been investigating destructive gold mining practices in Eastern Europe. The family is attempting to have a special vacation together at Halliwell Hall, an ancient estate in the north of England near Durham Cathedral. The estate belongs to Freddy and Gail Armstrong, the latter a former actress and close friend of Cara Peters. Freddy Armstrong is the CEO of a resort chain, buying up historic properties to turn them into expensive tourist playgrounds.

The Tolands’ carefree vacation turns frightening when there is an attempt to kidnap Jack, and to murder his father. Jack and Cleo (Gail Armstrong’s daughter) are drawn together and must deal with the threat of a sinister international mafia group known as the Cromlech Gang. They learn that the gang is after much more than gold: they seek power through a remarkable invention that enables the user to travel in time and space to alternative universes. The machine is tuned in with the ancient megalithic monuments, which retain the power to activate dimensional travel.

Jack and Cleo must outsmart the gang and enter “the tunnel down to moonrise” in order to visit the unspoiled world of Stonehenge that exists in an alternative earth. They discover an odd and dangerous society, and take part in strange-seeming ceremonies. But they soon see how respectfully these ancient people treat the earth and their dead ancestors. Getting back to earth is not easy and when they return Jack and Cleo find themselves caught between the international mafia and British intelligence, both of whom are out to capture the time-travel machine. Can they rely on their new friend, the scientist Arthur Harker, and the clever but somewhat dubious Freddy Armstrong to help them at the critical moment?

Tom Henighan, Ottawa writer and editor, is the author of some 20 published books, including fiction, poetry, and non-fiction. Some of his best-known non-fiction titles include two important books on Canadian culture, Ideas of North (1997), and The Presumption of Culture (1996), as well as Coming of Age in Arabia (2004), about the former British Colony of Aden, and a biography of the explorer Vilhjalmur Stefansson (2009). He has also published two adult novels (one of them Nightshade, a mystery novel, in 2010), two volumes of short stories, and six YA novels, including Mercury Man (2004), Doom Lake Holiday (2009), and The Boy from Left Field (2012). Tom was one of the (three) founders of ARC poetry magazine, and has published two volumes of poetry, including Time's Fools (2010). His work has been nominated for various awards, including The Seal Books first novel award, the Red Maple Award, the Ottawa Fiction Prize, Shamus Award and the Riesling Award. Henighan was Associate Editor of Ottawa Revue, an influential arts and entertainment journal of the 1970s-80s. In 2008, he was awarded the Victor Tolgesy Prize for lifetime contribution to the arts in Ottawa.

You have subscribed to alerts for Tom Henighan.

You have been added to Tom Henighan's favorite list.

You can also sign-up to receive email notifications whenever Tom Henighan releases a new book.