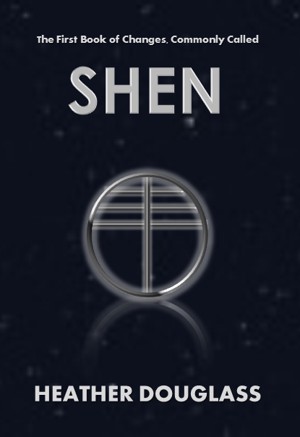 Rated 5.00/5 based on 2 reviews
Shen is a mythic space fantasy series where the number one mission of its crew is to discover whether they have one. Book Two due out in 2014. More
There is a spaceship that appears to be abducting itself a crew from different planets. Some will fear it, some try to explain it. David Travis tries to escape, and gets free more than once. Yet each time, life on Earth gets trickier (and shorter).

Oh, here's the embarassing thing. Not anticipating this biography, I have failed to fill my life with any exciting material.

Reviews of Shen by Heather Douglass

"Shen" is an engagingly offbeat science fiction novel which the author describes (slightly tongue-in-cheek) as “space opera for the unprepared”. I particularly enjoyed Part 1 which manages to combine elements of popular realist literary fiction (e.g. the main character is having an extra-marital affair etc) with an intriguing sci-fi premise (the main character keeps finding himself on an alien spaceship, but it’s not clear why – and the other people/beings on board don’t seem too clear about it either). Part 2 sees the action move to a different planet and the focus of the novel shifts to more conventional sci-fi/fantasy territory. However, it is still quite ambitious in its attempt to depict the interplay between different racial/cultural/religious groups (Part 2 reminded me of the late Iain Banks’ “Culture” novels and Frank Herbert’s “Dune” series).

For a longer review, see: http://www.paulsamael.com/blog/shen-by-heather-douglass

I found this very enjoyable and hope there is more to come.

You have subscribed to alerts for Heather Douglass.

You have been added to Heather Douglass's favorite list.

You can also sign-up to receive email notifications whenever Heather Douglass releases a new book.