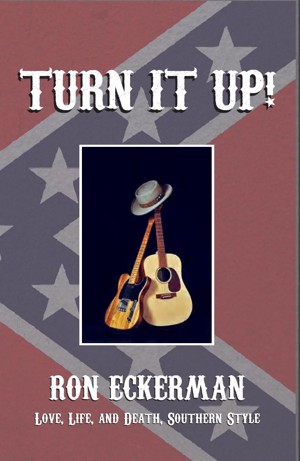 Join former Lynyrd Skynyrd tour manager and plane crash survivor Ron Eckerman as he transports you back in time to the glory days of the band and inserts you into their world. Lynyrd Skynyrd was one of the most iconic bands in rock history, and defined a whole genre of music, southern rock. Join the author and this band as they ripped their way across the USA and took the world by storm. More
Lynyrd Skynyrd is one of the most legendary bands in rock history. Surviving only four years after they were introduced into the industry, author Ron Eckerman was with them two of those years, and witnessed and participated in their meteoric rise to international fame. Eckerman has recorded his experiences with the band in his latest book, Turn It Up!, and takes readers with him on a journey that is often comical, and, in the end, tragic, as the band's incredible success comes to a halt on October 20, 1977, when their chartered plane crashes in Mississippi. The crash took the lives of lead singer Ronnie Van Zant, one of the greatest lyricists that ever lived, guitarist/songwriter Steve Gaines, backup singer Cassie Gaines, and assistant road manager Dean Kilpatrick. The book is a must read for Lynyrd Skynyrd fans, music fans and history buffs throughout the world.
Available ebook formats: epub mobi pdf rtf lrf pdb txt html
First 20% Sample: epub mobi (Kindle) lrf more Online Reader
pdb
Price: $9.95 USD
Buy Add to Library Give as a Gift
How gifting works
Create Widget
Tags: music rock music pop music american culture pop culture the seventies rock and roll concerts musicians rolling stones grateful dead music industry guitars music history american music lynyrd skynyrd book lynyrd skynyrd ronnie van zant southern rock gary rossington allen collins steve gaines billy powell leon wilkeson artimus pyle the honkettes
About Ron Eckerman

Ron Eckerman lives in Marina Del Rey, California. After the airplane crash he spent a few more years working in the concert industry, working with Foreigner, Waylon Jennings, and a few other groups. Since then, he has produced a television show and one film, and now spends his time pursuing his true calling, writing. Mr. Eckerman has written technical books and manuals for many years, has spent some time writing financial articles for various publications, and has written one novel. Since discovering that truth is indeed stranger than fiction his pursuit is now non-fiction books. This work is a labor of love, and is dedicated to furthering the legacy of Lynyrd Skynyrd and Ronnie Van Zant, the person who made the greatest impact on his life.

Reviews of Turn It Up! by Ron Eckerman

You have subscribed to alerts for Ron Eckerman.

You have been added to Ron Eckerman's favorite list.

You can also sign-up to receive email notifications whenever Ron Eckerman releases a new book.