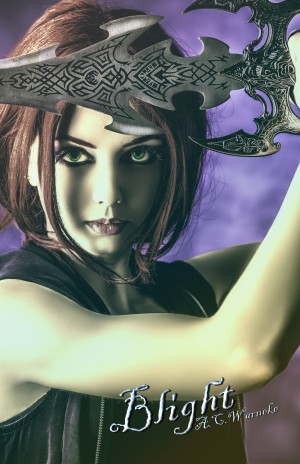 Rebecca “Beck” Lewis has always known she was destined for an early grave. Ever since her parents became monsters and tore her perfect world apart she has been shattered, unable to put the pieces together again. But she doesn’t care because her goal in what is left of her life is to take out as many Blights as possible before they take her out. More
Blight is dark and violent and it is the 1st book in a series

Rebecca “Beck” Lewis has always known she was destined for an early grave. Ever since her parents became monsters and tore her perfect world apart she has been shattered, unable to put the pieces together again. But she doesn’t care because her goal in what is left of her life is to take out as many Blights as possible before they take her out or she finally gives in to madness. She likes being able to kill the monsters without mercy, without doubts, and she is very good at what she does.
It doesn’t matter that the amethyst-eyed demon who haunts her dreams is slipping into her reality and is stealing pieces of her soul. It doesn’t matter that he is destroying whatever remnants of humanity she has left and fashioning her into something new. It doesn’t matter that he is taking everything she loves away from her.
She never had much use for her soul anyway.

Like most writers, I spend most of my time telling myself stories and occasionally writing them down when they get too loud to remain in my head. Each book likes to be created in its own way, which makes establishing an environment that is most conducive to writing quite difficult, though it occasionally involves Dove chocolates, music, minesweeper, lots of solitaire, notebooks and scraps of paper, doodling and day dreaming, and fruity, sugar-free bubble gum, not necessarily in that order and not always at the same time.

Of course, none of this would be possible without the love and support of my very loving and very tolerant family, who politely listen as I go on and on about my characters' motivations and back stories, their connections within the worlds created and how they fight to gain control of their destinies. But I am a cruel writer and make them earn their happy endings.

Since I am also a Romantic at heart, they are all happy endings.

I love hearing from readers.
Email me at: acwarneke@yahoo.com
or connect on facebook: www.facebook.com/ACWarneke
or visit my blog and leave a comment: acwarneke.com

Reviews of Blight by A.C. Warneke

I won this e-book through a series of fun events from Bookie Nookie, a GREAT Goodreads member. (Thanks again, BN!)

I honestly don't know how to describe this book; I don't know what to make of it. "Blight" was all over the place; yet, I couldn't stop reading it. I'm still shaking my head...

Rebecca (better known as "Beck") is a Blight killer. Blights are similar to vampires, but not quite. Beck's the best at what she does, but she has some inner demons that she really needs to tackle before she completely loses her mind. Also, she's deathly afraid of becoming a "Blight-biter," one who has been bitten by a blight and turns into one of them. Because of that fear, she has trained herself into becoming a lean, mean, Blight-killing machine. No one can surpass her skill in that aspect. However...

Beck has one "imaginary friend" in particular who comes to her at the weirdest times, and does things to her no imaginary friend should do. The friend hinders Beck's attempts at socializing with others, which causes her to believe she's not likable, not lovable, and cannot be around anyone for any long period of time. Even so, Beck still has people in her life who believe in her and want to be close to her, in spite of her shortcomings and misgivings. Her brother Michael tries to protect her because of the incidents that happened when they were both younger; Wilson, who also wants to be around her and wants to become intimate with Beck, but holds back for some reason that isn't quite explained in the book. It's frustrating to see so many chances get squandered away, but there is a grand scheme developing, and although Wilson and Beck are aware of it, they find it extremely difficult to stay away from each other.

Childhood experiences have caused Beck to become who she is and why she is the WAY she is. Again, it's very hard to explain, but the tale itself is gripping. Beck isn't even sure WHAT she is, so I'm left trying to figure out will she ever discover her true destiny? What is this extra "power" she has that no one else has? Is that why she's the best Blight killer around? What is the deal with her "intimacy issues?" And what's up with her "imaginary friend?"

Even the epilogue confused me. I'm still wondering what has Beck evolved into, if anything. God, I just can't figure this book out. I'm still shaking my head as I type this...when is the second book coming out? The author can't leave the ending like that, and not have something in the works!

Loved this book!! I couldn't put it down & can't wait for the next book. Beck is a great heroine & Shaw is yummy! "He" is dark & mysterious. Action packed & fast paced, Beck's apparent demise into insanity is epic. A.C.Warneke is a wonderful writer & takes you along for the ride. Brilliant book, hopefully a long series planned, as I loved the blight-filled world!

You have subscribed to alerts for A.C. Warneke.

You have been added to A.C. Warneke's favorite list.

You can also sign-up to receive email notifications whenever A.C. Warneke releases a new book.