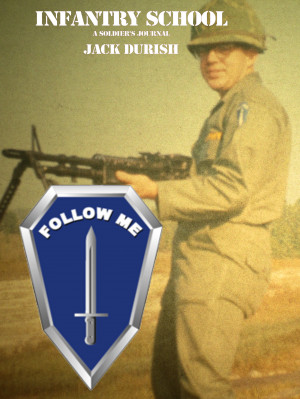 By Jack Durish
Rated 3.00/5 based on 1 reviews
A personal memoir of training to become an infantryman and an officer during the Vietnam War era. Full of humor, pathos, and the author's personal reflections on the men he trained with and their experiences. More
Most people don't know any more about the Army than what they read in Beetle Bailey© comics. The author, Jack Durish, didn't before he joined it. His father never served. His brother served in the National Guard during the period between Korea and Vietnam, but he was six years older and a mystery to Jack. He had uncles and cousins who served in World War I and II, but very little contact with them. Thus, Jack marched off to war with no idea of the trials awaiting Him.
According to the United States Department of Veteran Affairs there are something less than 23 million living veterans today. That's about 7.5% of the U.S. Population. Thus it may be said - paraphrasing Winston Churchill - never have so many known so little of what so few have done for them. If only a small number of the remaining population have any interest in knowing, this book will be worthwhile.
Jack created this memoir of his service as a member of the Army so that readers may experience it for themselves. It gives them an accurate idea of what it looked and felt like.
Each increment appears as a short story. The sum of them memorializes the year that Jack spent in training to be an infantry officer, beginning when he was inducted on March 3, 1966, until the date he was commissioned as a second lieutenant, February 10, 1967. The stories are arranged to present some semblance of continuity and a common narrative thread. In them, readers will not only experience the events, but also feel what it was like to train for war.
Download: epub mobi (Kindle) pdf more Online Reader
rtf lrf pdb txt
Price: Free! USD
Add to Library
Create Widget
Tags: vietnam vietnam 1968
About Jack Durish

Jack was born in Baltimore in 1943. He is a decorated veteran of the Vietnam war, a sailor, a fisherman, and a grandfather; all the makings of a great storyteller.

He was raised in Maryland on the shores of the Chesapeake Bay where he began a lifelong love of fishing, swimming, and sailing; avocations that he has practiced in more exotic locales including Hawaii, California, and Mexico. From rowboats to tallships, on deck and aloft, he knows the ropes and how to breathe life into salt water tales.

Graduating from Law School at the height of the troop build up in Vietnam, Jack volunteered for the Army and earned his commission as a second lieutenant at the Infantry Officer Candidate School at Fort Benning, Georgia. He served with the 9th Infantry Division in the Mekong Delta of Vietnam where he learned the thrill and horror of war. During this time he investigated and reported on three individual actions that resulted in awards of the Medal of Honor providing him with deep insight into the character of valor and heroism.

Upon discharge from active duty, Jack's life took an unexpected turn; he began working in advertising and public relations. He worked his way up the ranks from copywriter and creative director to become an advertising manager for a major international corporation, and ultimately, head of his own agency. During this period, he found time to write his first published work, Dream Pirates, a novella for young readers with limited literacy and students of English as a second language. He wrote his second published work, WordPerfect: Creative Applications, after abandoning the advertising business to become a successful independent consultant in the data processing industry.

As a parent, Jack became a favorite resource of his children's teachers, visiting their classrooms to recite original stories he created in response to the children's suggestions. He anticipates that his grandchildren's teachers may call on him for encore performances. Ghost River and The Chocolate Dragon will probably make their way into the pages of a children's book one day, but Jack has many other tales he wishes to tell first.

Throughout his life, Jack has preferred fact to fiction; real danger has always held greater fascination for him than imagined danger; and real acts of valor have seemed more heroic than fabricated ones. His passion for history began in high school when he began studying the American Civil War. After consuming virtually everything written on the subject, he began haunting the National Archives in Washington as well as any other place where he could get his hands on source material. Thereafter, he studied other periods of American history before branching out into world history. Although a voracious reader of many genres, history and historical fiction have remained his favorites. James Mitchner, Jack Whyte, and Jeff Shaara are a few of his favorite authors. Of course, as a sailor who has stood at the top of the mast on tall ships, Jack also counts Patrick O'Brian and Frederick Marryat among this group. It is no surprise then that his first novel, Rebels on the Mountain is a work of historical fiction, telling a story that begins at sea and then follows the rattle of musketry to the revolution in Cuba that Jack followed from the sidelines of the Cold War.

You have subscribed to alerts for Jack Durish.

You have been added to Jack Durish's favorite list.

You can also sign-up to receive email notifications whenever Jack Durish releases a new book.