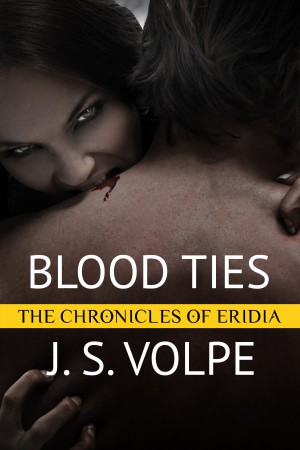 Blood Ties (The Chronicles of Eridia)

Jesus Christ XIV has spent his life in thrall to the vampires of Merrimont Castle, hidden deep in the remote monster-haunted land called the Wilds. Unlike the other human servants/livestock, who wistfully dream of a life beyond the castle walls, Jesus Christ XIV secretly wishes to become a vampire himself, a being of grace and culture and eternal beauty. And though Ascensions—the raising of a lowly servant to the ranks of the vampires—are exceedingly rare, it soon becomes clear that Jesus Christ XIV has indeed been chosen for this signal honor. But on the eve of his Ascension, everything is thrown into chaos by the unexpected appearance of the legendary vampire hunter named Hull, the very man the vampires fled to the Wilds to escape…

Also in Series: The Chronicles of Eridia

You have subscribed to alerts for J. S. Volpe.

You have been added to J. S. Volpe's favorite list.

You can also sign-up to receive email notifications whenever J. S. Volpe releases a new book.