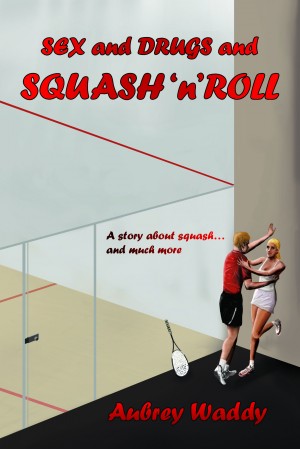 Sex and Drugs and Squash'n'Roll

Jolyon faces enormous hurdles in his quest, on court and off, many of his own making. There is his wild attitude to the typical temptations faced by the testosteroned teen. What does every professional athlete need before a crucial match? A good night’s sleep. And what best interferes with a good night’s sleep? We all know the answer to that, Jolyon’s favourite pastime. What do you NOT find promoted in the World Anti-doping Agency manual? The dense, smoky atmosphere of the illegal rave. What is Jolyon’s next favourite pastime? Mixing music through megawatt sound systems... at illegal raves.

Sailor uncovers a freakish physical ability in his protégé. On court Jolyon is an all-conquering whirlwind. But physical ability is not enough. How does he deal with the sublime talent of the American, Julio ‘Razza’ Mattaz, who is taking squash to another level? How does he resist the machinations of another domineering parent, Frenchman Marcel Darnaud, father of Jolyon’s giant rival Armand? Finally, how does Jolyon cope with his longings for his training partner Zoë? World champion Zoë, whose interest in boys is far from certain.

The story storms through to the verge of Jolyon’s twenty first birthday, at the iconic Tournament of Champions in Grand Central Terminal, New York. Here his last chance is played out, off the court against dark forces, on the court against an overwhelming opponent.

Aubrey Waddy writes for the fun of it, and because the word ‘pension’ is merely French for lodging. He lives in Little Chalfont, just outside London, England, and divides his time between consultancy in the medical device industry, writing and playing squash.
Aubrey’s writing history includes 45 unpublished children’s stories, written for his three sons, and another novel, The Progressive Supper, which was taken up by a small publisher in 2002, and which will be republished in June 2012 as Just Desserts. The book received little exposure in its first incarnation, but there is solid Biblical precedent for a second coming.

You have subscribed to alerts for Aubrey Waddy.

You have been added to Aubrey Waddy's favorite list.

You can also sign-up to receive email notifications whenever Aubrey Waddy releases a new book.