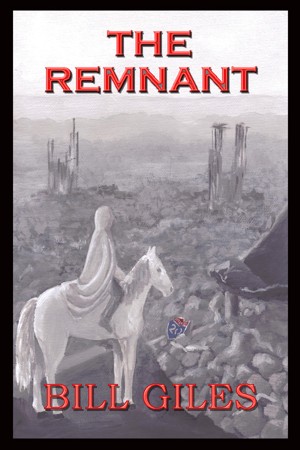 By William Giles
Rated 5.00/5 based on 6 reviews
In 2078, sixty years after a destruction nearly ended life on earth, a small group yet survived in a protected valley in North Georgia. Only Lon, a renegade, had ventured outside the valley. Then an injured stranger arrived and before she died, told of her settlement 400 miles west. Lon and two others were sent to find her home. This is an account of their epic journey, and dangers they endured. More
A small group, acting on a vision from God, prepared a sanctuary in a cave in North Georgia. Their preparations were timely. june, 2018 brought cataclysmic events that essentially ended life on earth. When the radioactivity subsided, the survivors assumed they were the only people left. This "remnant" emerged from their cave, walled in a fertile valley, and lived there secluded for nearly sixty years. They were unaware of the changes that had taken place outside their small world.
Lon could have told them. he was one of the remnant, but a renegade that made frequent, unsuccessful trips in search of other survivors. He had seen the destruction and had battled the hideous, dangerous beasts that now roamed the land. But no one cared.
Then an injured stranger arrived in the valley. She died, but not before telling of her home, a settlement 400 miles west. Lon and two others were chosen to find her settlement and make contact with her people. This is an account of their epic, fifteen month journey-fraught with conflicts, murderous mutatiions, and unimaginable horrors. It is a story of the unbreakable friendship that developed and the ultimate success that gave hunmankind another chance.

Bill was born in Las Vegas, Nevada and lived in California, Arkansas, Tennessee and Missouri before attending the University of Tennessee, where he received his degree in Chemical Engineering. His career included engineering and management positions for several Chemical Companies in the South and Midwest. Since retiring from his plant manager's position at a plant in Alabama, he has enjoyed his hobbies of woodworking, gardening, basket weaving and writing. He also volunteers his time to entertain senior citizen groups with his own unique stand-up comedy routines. Bill and Nancy, his wife of 54 years, have traveled extensively. They have four daughters, nine grandchildren and two great-grandchildren.

Outstanding, a real page-turner. Really enjoyed getting to know the characters. Felt like I was on the journey with them!

Excellent Book and I could not put it down! I'm looking forward to reading more from this author.

I was hooked from the first chapter. Science fiction is not my usual genre, but I thoroughly enjoyed this story. Great character development.

(reviewed 6 days after purchase)
Ande Hogan reviewed on July 5, 2012
(no rating)
This was a very enjoyable book. Would like to read more by the same author. Russ and Mary Logan

Really enjoyed reading this book. Would like to read another by the same author.

Awesome read! Real page turner. Could not put it down!

Excellent book. I like apocalyptic sci-fi so downloaded the sample. It had me hooked after the first few pages. I was so wrapped up in the adventure I could hardly put the book down.

You have subscribed to alerts for William Giles.

You have been added to William Giles's favorite list.

You can also sign-up to receive email notifications whenever William Giles releases a new book.