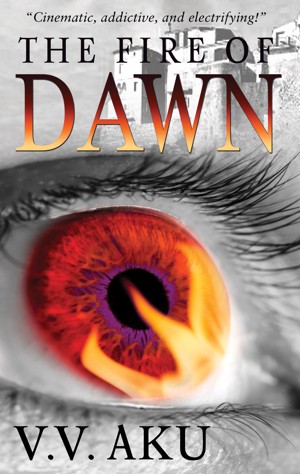 The Fire of Dawn

By V.V. AKU
Leah Koopmans’s life as a teen is brutally flipped upside down when she discovers that she is a bloodthirsty immortal. Horrified at what she has become, she joins Max Machiavelli and his coven. But as the mysteries shrouding her sudden change to immortality unravel, Leah quickly learns that her aversion to taking life isn’t the only thing that sets her apart from this group of herculean strangers. More
It’s the last day of the summer holiday in The Hague when Leah Koopmans’s carefree life as a teen is brutally flipped upside down. Her pale skin turns a dazzling gold, her senses heighten, and her muscles possess an uncanny strength. But with these exhilarating new powers comes a thirst that can only be quenched by one thing: human blood.

While her body craves for fresh victims and her heart drowns in guilt, she meets inhumanly handsome Max Machiavelli, who claims that Leah is immortal like him. Infatuation ignites into blistering passion when she joins his coven in Amsterdam. But as the mysteries shrouding her sudden change to immortality unravel, Leah quickly learns that her aversion to taking life isn’t the only thing that sets her apart from this group of herculean strangers.

V.V. Aku has always believed in beautiful stories. She found the man of her dreams and her way in complex China, and wrote a fairytale of her own: The Fire of Dawn－a scintillating tale about strength, self-discovery, and a girl who dared to follow her heart.

Born and raised in The Netherlands, V.V. Aku (Veerle Ackerstaff) soon discovered that the world was a place worth exploring. After graduating high school, she set out to travel the globe until she finally touched down in China. On the border of Tibet she met Anzi Aku, a wild Black-Yi man who lives at the foot of the Himalayas. She has joined his clan and tries to find her place among the tribe and its shamans. When she’s not researching the clan’s mythology on vampires, she shamelessly gives in to the compulsion to write about the countless characters that haunt her dreams.

V.V. Aku is the author of The Fire of Dawn and Black Dusk. She has been the creator of stories since the age of three, and has a Post-Graduate Diploma in English Language Teaching to Adults from The University of Cambridge ESOL. After nearly a decade of working as an English language teacher and TEFL trainer in China, Thailand, The Netherlands, and the UK, she now devotes all her time to writing, her family, and practicing Kung Fu. The Fire of Dawn is her debut novel.

Reviews of The Fire of Dawn by V.V. AKU

You have subscribed to alerts for V.V. AKU.

You have been added to V.V. AKU's favorite list.

You can also sign-up to receive email notifications whenever V.V. AKU releases a new book.