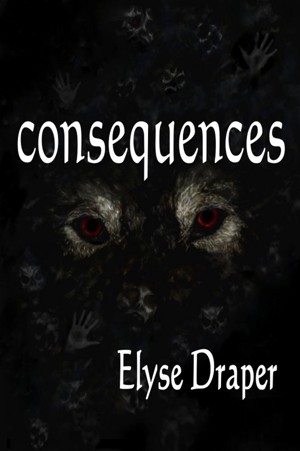 Elyse Draper, as a native Coloradan, brings a distinctive vision of the Rocky Mountains to life. When that sight is combined with her love of world travel, history, sociological sciences, psychology, and humanism, the outcome is a setting that spans the world and imagination. That aptitude when mixed with an educational background of law, philosophy, and French, brings the result of a fantastic yet realistic renaissance storyline, ultimately taking the reader on an exceptional journey.

Working as a freelance journalist for Examiner.com, Elyse reports on the publishing world and supports Denver's local literary contributors as Denver's Author Examiner. Still living in Colorado with her husband and daughter, she is working on her newest speculative fiction novel. Coming in 2012, keep a look out for the next two novels in the 'Freewill' trilogy, 'Consequences' and 'Vindication'.

Also in Series: The Freewill Series

Reviews of Consequences by Elyse Draper

*I received this e-book through We Heart YA Books!*

So I was a little disappointed with this book. I was completely in love with the first book in this series but this sequel fell flat for me. It seemed more slow paced and there wasn't a lot of dialogue but there was a lot of reflection especially by Michael. I assume she did this to reflect Michael's character but it got a little tiring after a while. The saving grace in this book was actually the characters. The authors writes her characters so flawlessly that you as the reader have to fall in love with them. I loved Cassandra (especially her very interesting back story), Michael was a another great character, Artemis was a great addition, and I even liked Dimitris. [SPOILER The ending was a little predictable especially since Artemis was so against Ellie, but that was an excellent twist all the same. I can't wait to see what really happened to Ellie in the third book! (hide spoiler)] Even though this book didn't live up to my expectations coming away from the first I would still recommend it to anyone. The plot remains interesting and with the cliffhanger at the end, I can't wait to read the third in the series.

Right after I finished Freewill, I immediately wanted to begin reading Consequences because of the amazing story line and literal techniques Elyse used to lure the readers in. This was one thing that I was really happy about - I hate reading an AWESOME book and having to wait until the next is released, BUT i got to read this one right away ( thanks to Elyse (: ) which was great. I found that this one was a little bit of a slower read, but maybe that's because of everything that happened that it was just too much to process at once ( in a good way though, don't let this discourage you! )

Now I don't want to reveal anything because I don't want to spoil this series for anyone interested in reading (I 100% recommend it) so I'm going to leave it spoiler-free but still tell you what I enjoyed!

First of all, I liked what direction the series was headed in, even before reading this second instalment. The story line is so unique and I loved how Elyse was able to incorporate so many different world cultures/history/mythology into her writing - Artemis is a great example of this - she's pretty darn awesome.

PS. To add a little side note, I loved the title of this novel, all three in fact actually. There are so many interpretations of the title that readers can come up with and I really enjoyed having that freedom. You don't get that a lot nowadays..

In the first book, a lot of the questions that I pondered about - to myself of course - while reading were answered, but not all of them. When I continued onto reading this one, they were thankfully answered, but more questions also came into mind. This made the book all the more interesting!

Of course, as I mentioned, the story line is so unique which makes the readers even more involved. AWESOMENESS! :)

I 100% recommend this series, so give it a shot! Nothing's holding you back :)

(Thanks to Elyse Draper for providing me with this entire series)

I included many of my thoughts in my review of Freewill, the first book in this series. I wanted to like Christopher and his evolution, but he just made me angry. The villians were truly evil and the good guys were only slightly evil....
I was annoyed at teh immature way the characters dealt with their problems, and the only characters that had a clue were the animals! Just couldn't buy into this series.

This book was harder to read than the first. When I really get into a book, I usually can't put it down. With this one, I didn't have that problem. I found with Christopher telling his story of what happened with V, instead of the reader experiencing it themselves made the story hard to read.

It did pick up later, and is a very original idea, and well written, but I still didn't enjoy it as much as the first.

As soon as I finished Freewill (book one) I started on Consequences. I’d finished a few days ago but decided to finish reading all three before I wrote the reviews. As I said before, in my review for Frewill, I love the fact that I didn’t have to wait for the next book to come out and hanging on to the cliff hanger (which I hate) for very long all I had to do was go to the next book. Loved it!!

I still love the plot and its exceptional story line. It’s well written, again no errors that I can remember of. The story continues to surprise me with the uniqueness unlike anything I have read recently (besides the first book of course) and can’t say enough on how good it is.

The story is mostly about Ellie with a little Christopher. This second installment is more like a first installment because it goes back and explains, kind of like breaks everything down. It read more like what a book one should have, but still very interesting.

This one is a little on the slow side but still a good read.

Consequences.. a great followup to freewill! In this book we see that Ellie is learning how to control her powers! And Chris is trying to deal with the last year! Ellie and Chris are sperated but the love is still strong as every! And just when you think you know what will happen next Elyse Draper throws you a curve! As in the first book this one leaves you hanging and ready for the next one! This series is worth the read!!

Consequence starts a year after the end of Freewill and you find yourself lost and wanting to know how things got to where they are. That is just momentarily since the author incorporates the story of the missing year into the present story very effectively. One can see right way that there is a build up to something big that will happen and as you think you can predict what will happen next, the author throws you a curve ball.

This book is without a doubt a page turner.

‘Consequences’, a welcome sequel to ‘Freewill’, is the second spell in the New Adult* trilogy woven by the clever writer known as Elyse Draper.
We catch up with Christopher in Montana, where he now lives off the grid, while Ellie is travelling the world in search of a mentor. Once again, the author balances dark and light, good and evil, like a wonderful and experienced circus juggler. Her style, while poetic, is like a card trick where your eyes try to follow the ace that her deft hands move constantly. You think you know where it is, but it is already over there. And she has given you all the signs to figure it out, but you were too spellbound to notice.
In Montana, in a cabin lost among the trees, Michael the forest warden listens to his mysterious friend Christopher reveal his past and what happened in Vegas after the 24 hours where Ellie had become solid to be with him. Michael is only human, but his keen interest in Native American folklore is suddenly validated. In the meantime, Ursa the wolf, Lune’s mate (husky and Christopher’s best friend), gives birth to a very special offspring: Artemis the white wolf.
In her travels, Ellie sees Japan and spends some time in Africa, before reaching Greece and meeting the legendary Cassandra. Ellie is learning to control her powers, she is learning that she is not just gentle and compassionate, but she is also a very powerful empath, one that some secret organisation in Europe could be wary of.
Reading ‘Consequences’ is like catching up with old friends (alive and dead, death being relative), and meeting with new ones. ‘Consequences’ is a tale written with love. But remember: Elyse Draper is a twisted writer, who will leave you hanging to the cliff by your fingertips……. Again…….

*New Adult is an American genre between Young Adult and General Fiction.

You have subscribed to alerts for Elyse Draper.

You have been added to Elyse Draper's favorite list.

You can also sign-up to receive email notifications whenever Elyse Draper releases a new book.