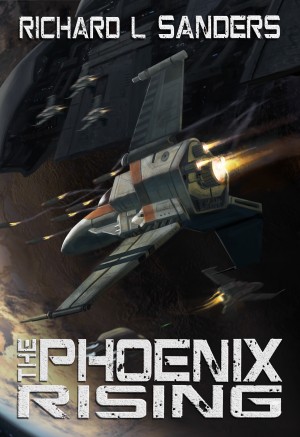 To make matters worse, Calvin is hunted mercilessly across the stars by Intel Wing’s top operative, Lafayette Nimoux, who is aided by a double-agent on Calvin’s own ship.

Meanwhile the sands of fortune are shifting within the Empire, upsetting the delicate political climate. Warships and civilian transports are vanishing without a trace and murders in the dark are going unnoticed. All eyes are fixed on Renora—a human colony that has been savagely attacked and thrown into civil war. The prime suspect behind the attack is none other than Princess Kalila Akira. All the dark signs are pointing to what could be the death of the Empire, and the end of human dominance in the galaxy."
Available ebook formats: epub mobi pdf rtf lrf pdb txt html
First 40% Sample: epub mobi (Kindle) lrf more Online Reader
pdb
Price: $8.99 USD
Buy Add to Library Give as a Gift
How gifting works
Create Widget
Tags: mystery military space opera sci fi phoenix conspiracy
About Richard Sanders 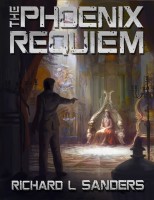 Very intriguing series, a must read!

I needed to attempt the sequel after having read the first book. The writing style had the similar pace and excitement I have come to rely on.

This story answers some of the unanswered questions posed in the first book, but adds many more questions. I think I would have preferred the author to have answered all the pertinent questions related to this story in this book, rather than wait until the third book. However, these are sci-fi mystery novels, and the mystery did keep me hanging on, despite the lack of answers.

As for other criticism I did find it uncanny how the characters seemed to guess accurately what their adversaries were thinking, which made the action slightly less believable.

Overall this story is an intriguing, suspense-filled mystery that continues the story of Calvin Cross, Commander of a rogue Intel Wing craft called the Nighthawk. I think the military action scenes, the realistic portrayal of the characters and the intriguing scenarios they meet with are the most entertaining and aspects of this novel. Oh, and the fact that I can’t stop reading this series!

I must echo all of the other reviews. This is a must read. I literally couldn't stop reading it.

(reviewed 10 days after purchase)
Andrew Kwan reviewed on Jan. 14, 2013
(no rating)
Continues where the 2nd book left off, literally. Doesn't skip some period of time like some sci-fi serial novels do. Already is on my "must read" list of sci-fi books/serials. I was hooked a few chapters into the first book, so it was only logical I get this second one. Characters are nicely developed. Mystery stays just that: mystery. Unlike Susan Rose, I actually missed my own subway stop reading this book. ;)

After reading the first book, I was hooked! Bought and read it this morning. Great character development! Can't wait for the next one, hoping there'll be more afterwards :)

Very good book, I was so engrossed in it that when I came to the end of it, I was stunned, I wanted more! Can't wait for the next one!

I almost missed my subway stop – that’s how engrossed I was in The Phoenix Rising.
'Rising' picks up the story where The Phoenix Conspiracy left off. I recommend reading 'Conspiracy' first; while both novels are complete in themselves, the overarching mystery continues. Besides, you can’t beat Conspiracy’s price.
The series revolves around Calvin Cross and the crew of the IWS Nighthawk, one of a few phantom-class stealth warships serving the human Empire. Once stars of Intel Wing, the authorities are now actively hunting the Nighthawk with a dead or alive mandate. But just as Cross had questioned the motivations of the villain of 'Conspiracy', so his assigned hunter wonders about Cross’s motivations and is determined to take him alive.
Sanders’ series takes place against a well-built backdrop; his aliens have unique perspectives, beliefs and desires, rather than being humans in disguise; and his characters, human and alien alike, are all individuals with their own issues including addiction, unrequited love and youthful rebellion.
The only downside is that I have to wait for the next book in the series.

Just finished this second book of the series. It really got me in. Richard L Sanders has done a great job. Can't wait for the 3rd book to be published!! If, like me you enjoyed Stephen R Donaldson's The Gap series then you will also enjoy this. Well done Richard