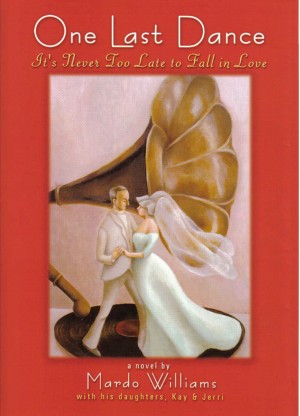 One Last Dance: It's Never Too Late to Fall in Love

After a disastrous first meeting, Morgan, 89, moves in with Dixie, age 79, strictly a business arrangement, both maintain. But Morgan has more frivolous pursuits in mind. When a troubled grandson collides with the daring course set by the lovers, not only does he save their lives, but he brings Dixie and Morgan the love and pride they’d lost decades before with the loss of their children. More
A story about finding love at any age, One Last Dance is the delightful tale of Morgan, aged 89, and Dixie, 79, two “mature” individuals on seemingly divergent paths. Despite their disastrous first meeting, complete with a dropped birthday cake, broken eyeglasses and insulting remarks, it was obvious to bystanders, even then, that the two were fated for each other. Written with great humor and a deep understanding of the challenges associated with aging in America, One Last Dance is a joy to read and an inspiration to all generations, reminding us to live every day and always be in search of new experiences, regardless of age. Author Mardo Williams lived that philosophy, by writing this, his first novel, at age 92.

At the tender age of 88, when many people would be content to sit back and reflect; Williams began a brand new chapter in his professional life. After over six decades as a journalist, many of those with the Columbus Dispatch, Mardo decided to write his first book, based on stories he’d been telling for years. The result was Maude (1883-1993): She Grew Up with the Country, a loving, humorous and meticulously detailed biography of his mother, an extraordinary woman who experienced our country’s immense growth and changes for over a century, until her death at the age of 110. The book, published in 1996, found great success, propelling author Williams into the public arena. Maude is still a favorite among discussion groups and has been adopted as a supplemental text in many college American History courses. Next, after penning a whimsical book of children’s stories, Great Grandpa Fussy and the Little Puckerdoodles, Mardo began something completely different–a novel–and One Last Dance was born.

One Last Dance follows the relationship of Dixie and Morgan, as they begin to date and ultimately decide to move in together–for convenience only, they agree. But the relationship changes and strengthens as the couple unites to combat illness, scandal and a near-fatal accident. It’s also a tale about how insecurities, humiliations and fears, thought long past, can haunt a person throughout their days. Dixie fears intimacy. Morgan has concealed important details about his divorce, his estranged children, and his lost job. And all the while, a mysterious intruder lurks, bent on vengeance for past wrongs. He invades their lives, exposing their most intimate secrets and lies.

As Mardo completed the first draft of One Last Dance, his health was failing and his eyesight was all but gone due to macular degeneration. He made his daughters, Kay and Jerri, promise to finish the book if he could not. He died at age 95. Honoring their father’s wishes, daughters Kay, a writer, editor and actress in New York, and Jerri, a former master English teacher, editor and writing teacher, began the often painful undertaking of finishing their father’s work. Four years later, One Last Dance was published. On October 21, 2001 Williams became the first posthumous recipient of an Ohioana Library Award for his body of work as an author and journalist.

One Last Dance won a 2006 Independent Publishers Book Award, and was a finalist in the National Readers’ Choice Award. Mardo’s daughters, Kay and Jerri won a 2009 Ohioana Library Award for "unique and outstanding accomplishment in writing and editing" for finishing One Last Dance.

“Williams' writing shows a ready wit, and neither Dixie nor Morgan is spared from comic consequences. In the first scene, Dixie gets creamed with a birthday cake; later, Morgan finds himself wiping a guest's spilled wine with a pair of Dixie's lace-trimmed underpants. One Last Dance is charming and touching.” Barbara McIntyre, Akron Beacon-Journal

“Williams and his daughters have achieved a thing of beauty. Do yourself a favor, snuggle up in a chair and enjoy this magnificent hallmark of senior romance.” Debra Kiefat, ArmchairInterviews.com

First 20% Sample: epub mobi (Kindle) lrf more Online Reader
pdb
Price: $9.99
$4.00 USD
Buy with coupon Use the code AGB60 at checkout for 60% off during our site-wide promotion!
(Offer good through May 31, 2020 )
Have a better coupon?
Add to cart, then apply your coupon
Add to Library Give as a Gift
How gifting works
Create Widget
Tags: romance inspirational daughters humorous fathers teens grandparents jerriwilliams kaywilliams
About Mardo Williams

Mardo Williams' story is right out of the pages of Horatio Alger whose books he read as a young boy. Alger's heroes valiantly overcome poverty and adversity and this seems to be exactly what he did. He grew up on a 100-acre subsistence farm; serendipitously--after he lost his job at the Kenton, Ohio car shops because of the Depression--he answered an ad and became the only reporter at the Kenton News-Republican, a small Ohio daily. (He'd always had an inclination to write.) He had no college degree but while he'd been cleaning out the insides of the smokestacks of the locomotives up in Toledo, he'd taken two courses at the business school there, shorthand and typing, and so he was prepared to be a reporter. He did all the beats, hoofed it around the small town of Kenton digging up stories on slow news days.

Nineteen years later, after World War II ended, the Columbus Dispatch recruited him to the copy desk. He moved up the ranks from the copy desk to travel editor . . . and in 1954 he was asked to develop and write stories about the world of business. Columbus was booming at this time. Mardo, familiar with pounding the pavement to search out stories, did just that. Within the year, he was writing a daily business column with byline.

After he retired from the Dispatch in 1970, he freelanced for several years, editing a newsletter and doing publicity. He began his second career, writing books, at age 88, after his wife died after a long illness. At his daughters' urging, he learned to use a computer and began writing his first book, Maude. It was about his mother, who lived to be 110, and also about life at the turn of the century when everything was done arduously by hand. This was to be for family, but his daughter Kay read a few sections to her writers group. They loved it, and wanted more.

The manuscript grew from 50 pages to a 334 page book with a 32 page picture insert. The finished product was published in 1996, Maude (1883--1993): She Grew Up with the Country. It has been adopted by some college American history classes as a supplemental text "to put a human face on history."

Then Mardo wrote an illustrated children's book, Great-Grandpa Fussy and the Little Puckerdoodles, based on the escapades of four of his great-grandchildren. He decided at age 92 that he would try something completely different--a novel, One Last Dance. His magnum opus.

He spent three years writing the first draft while touring with his first book, Maude. He persevered through illness and blindness, determined to finish it before he died. It was the most challenging piece of writing in his 73-year writing career--a long work of fiction when he'd been writing short non-fiction pieces for most of his life. After his death, his daughters Kay and Jerri spent another three years editing and revising One Last Dance, and after it was published, four more years touring with it as the centerpiece of their program, Keep Dancing!

One Last Dance fills a niche, especially now that the baby boomers have turned 65. The novel gives readers hope and laughs. Book discussion groups throughout the country have read it and loved it. Many readers have said, "Well, if Mardo could do this (embark on a new romance, write a book) in his nineties, I can certainly give it a try myself; I'm only 70 or 80 . . ."

Many honors came to Mardo and to his writing after his death. In 2006 One Last Dance won the Independent Publishers Award for Best Regional Fiction. The book was also one of five Finalists in the National Readers' Choice Awards for 2005. Before that, Mardo won an Ohioana Citation--their first posthumous--for his body of work as a journalist and author (for, at that time, Maude and Great-Grandpa Fussy).

His daughters, Kay and Jerri, won a 2009 Ohioana Citation for "unique and outstanding accomplishment in the field of writing and editing" for finishing One Last Dance.

2011 Finalist, Romance Category, Dan Poynter's Global E-Book Awards
Morgan, age 89, and Dixie, 79, aren't crazy in love, but they're moving in together anyway. Their friends think they're just crazy. He likes her blue eyes, and figures she'll do all the housekeeping. She likes his banking career, and figures he'll pay the bills. They're both wrong. When a troubled young man collides with the daring course set by the lovers, the impact changes all their lives.

Finer with Age Interview – Kay Williams and Jerri Williams Lawrence
Kay and Jerri talk with Merle Grace Kearns about their late father Mardo Williams: how difficult and exciting it was to finish his romance novel, One Last Dance, after his death at 95. The novel was begun by him at age 90 when he met a woman 10 years younger and they moved in together.

You have subscribed to alerts for Mardo Williams.

You have been added to Mardo Williams's favorite list.

You can also sign-up to receive email notifications whenever Mardo Williams releases a new book.