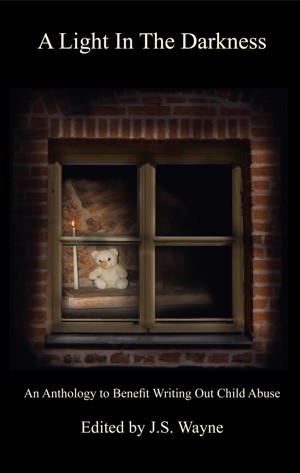 A Light in the Darkness

By J.S. Wayne
Rated 5.00/5 based on 1 reviews
In A Light in the Darkness, the inaugural anthology from the authors of WOCA, a dark world awaits you. Spanning centuries of time, encircling the globe, and running the gamut from eerie historical fiction to gritty urban fantasy to page-scorching erotic romance, these authors unflinchingly dissect the horror of child abuse in all its forms. More
These authors have taken great pains to ensure the innocent are assured justice and the guilty pay for their crimes in the unique fantasy worlds they have created. Sadly, in real life, this is not always the case.
This book contains scenes of graphic violence and honest depictions of child abuse. Readers who may find such material unduly disturbing, objectionable, or “triggering” are strongly advised not to read it.
Some of the newest and hottest names in fiction have lent their talents to this collection, including Gillian Colbert, Amber Green, R. Renee Vickers, Eric Keys, Phoebe Valois, and J.S. Wayne.

Born in Amarillo, Texas, J.S. Wayne has lived, worked, or traveled in approximately two thirds of the North American continent and has amassed a resume that could kindly be described as “eclectic.” He currently resides in the Texas Panhandle with his wife, Erin, and his puppies, Munchkin and Thor. In his laughably sparse spare time, he enjoys reading, scary movies, strategy games, and collecting obsolete weapons. He is currently hard at work on a host of work-in-progress novels, short stories, and poetry, including the sequel to Requiem, Requiescat.
His currently available projects include Shadowphoenix: Requiem; "Angels Would Fall," "Angel Of The Morning," and, as part of the Red Roses and Shattered Glass anthology of dark erotica, "Espiritu Sancti," as well as the forthcoming Angels Cry and Wail. With the exception of Shadowphoenix: Requiem and Wail, all of these stories and novels are or will be available from Noble Romance Publishing.

This is a gripping read and well worth the money. Each story is unique and this group of writers blew me away. There is something in this book for everyone. A definite must read.