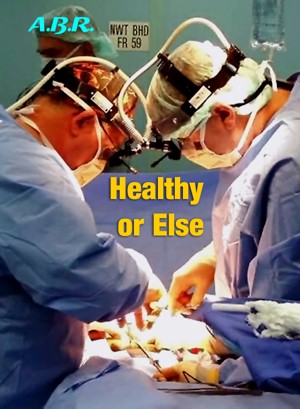 By A.B.R.
Rated 4.33/5 based on 3 reviews
A speculative satire about the health care industries assuming dictatorial powers in a recognizable near future society. Healthy or Else tells the story of one family's brush with the health care regime and what happens to these good people. The trends are in play; the future may not be as far away as you think.
Download: epub mobi (Kindle) pdf more Online Reader
rtf lrf pdb txt
Price: Free! USD
Add to Library
Create Widget
Tags: speculative fiction medical satire sci fi future society social satire vancouver near term future
About A.B.R.

I have suffered from bibliophilia since I first learned to read. Writing has always fascinated me. Other people began noticing my prose in the first year of junior high, grade eight for people in school jurisdictions using different terminology. For some reason, however, other people seem to like my writing more than I do myself. Despite that handicap, I have worked, off and on, as a journalist, but never tried to publish any of the literary attempts I was sometimes driven to scribble down in notebooks or on scrap paper, or type into an old computer that would inevitably break down and lose my work. Another expression of my bibliophilia was a short-lived attempt to own and run a used bookstore. That was before the internet and the worldwide web changed publishing and book distribution forever. Whether this or any other story I may publish in the future are any good is up to each reader to decide for his or her self. That is why my first published smashwords stories are free.

Reviews of Healthy or Else by A.B.R.

Talk about "food police"! Interesting future dystopia where health rules, and you can be arrested or fined for being anything less than perfectly healthy. Good mystery too. I had to keep reading to find out what happened to Zoe.

This is a good, solid story about an important subject. A wag whose name I've forgotten once said something along these lines: When we were a young species, we killed for political and religious reasons. Then we matured a bit, grew wealthy, and began to kill for economic reasons. But now that we're fully mature, and have realized that health is the only thing that matters, we kill for therapeutic reasons.

Though I usually dislike stories told in present tense, I think your choice of present tense suited this tale quite well. It enhanced the immediacy of the thing, which, when coupled to good narrative timing, amplifies the emotional impact of a story.

I have one substantive criticism: a cautionary story of this sort tends to be more effective the gentler it is. If, rather than tackling the horror in its depths, you depict the inception of the thing feared, when unease is the dominant reaction, you avoid the "it can't happen here" reaction that blunts many otherwise fine pieces of cautionary fiction. Indeed, one of the most important cautionary books ever written, Ayn Rand's "Atlas Shrugged," lost impact to exactly that effect in the mind of many a reader. You've told a plausible tale, but at a couple of points it edged over into the heavy-handed, precisely because you put your characters into "the belly of the beast." Keep this in mind for future cautionary works.

A few minor nitpicks:
1. Stabilize the spelling of "dessert." Two "s's" make it the sweet dish consumed at the close of a meal; one "s" makes it an arid region that gets little rainfall. Also, there's a "2,0000" where you meant "2,000." Not a terribly big deal, but in a short story every character counts.
2. Among the most commonly confused words are "your" and "you're." The first is the possessive of "you." The second is the contraction of "you are."
3. Your dialogue is generally good, but your employment of commas is a little irregular. Commas in dialogue are indications of speech rhythm. Use them wherever the speaker might pause, whether for emphasis or for breath. (On the other hand, congratulations for demonstrating the proper use of the semicolon.)

You have subscribed to Smashwords Alerts new release notifications for A.B.R..

You can also sign-up to receive email notifications whenever A.B.R. releases a new book.