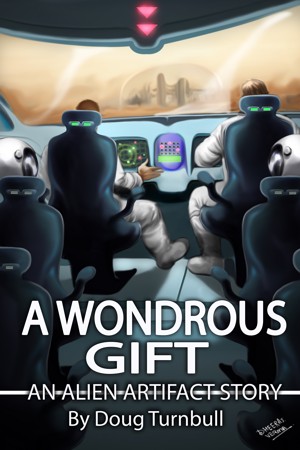 By Doug Turnbull
Rated 4.00/5 based on 1 reviews
Elderly shipping tycoon, Andrew Smithers goes spelunking in a Martian cavern he once explored as a young man and discovers more than he bargained for. More
Set in the early 22nd century, this story gives the reader an idea of what life on Mars was like a century after first being settled. Andrew Smither’s life spanned that century and as he recalled it, we get a feel for the new society that was created. Youth restoring treatments, wingless flying machines, sprawling mining towns and plural marriages were just some of the features on the landscape of this new world.

Take a high speed trip over thousands of miles of Martian desert in an Ariel Sprite Flyer, a wingless flying machine no larger than the family car. Explore an ancient Martian cave and see the spectacular Crystal Room. And meet some of the colorful characters that populated Andrew Smither’s long life.

This is a wonderful extension of the novel 'The Man Who Conquered Mars' by Doug Turnbull. A Wondrous Gift is a short and sweet description of the story which was left untold in the previous book. The language of the story is very smooth and easy to understand, suitable for all ages. Undoubtedly this story is another instance of the writer's wonderful talent.