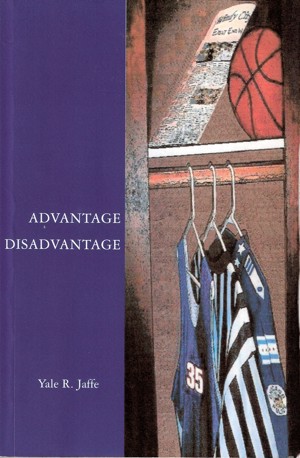 I grew up loving the rythym, grace and beauty of well played basketball. In order to stay connected to the game long after my playing days were over, I began to referee games. I have continued to officiate high school games for over 20 years. I love the positive aspects of amatuer athletics, despite the dark sides. Many of the stories told in the book are based on actual events that I have observed. Advantage Disadvantage examines the greed, corruption and betrayal of the adults who are associated with a high school basketball prodigy. I'd like to think that the book is about the strengths, weaknesses, triumphs and failures of the characters. Secondarily, it is an expose of high school sports.

Fictional stories and films about baseball and football are plentiful, but basketball stories seem to be relatively scarce. Although I'm not a huge fan of basketball, I thoroughly enjoyed Yale Jaffe's "Advantage Disadvantage." It's a welcome addition to the sports fiction genre, with its story of the development of a young basketball player, Jamal Imari. "Advantage Disadvantage" has a nice storyline with a cast of interesting and colorful characters, but to me the real attraction is the behind-the-scenes look at how promising young basketball players are recruited and groomed for college hoops. The story takes place in Chicago, but the location could be any large American city.

The cast of characters includes Jamal Imari, a talented young basketball player with a burning desire to play in college; his father Marcus, who helps with his coaching; Jamal's mother Elizabeth, who turns elsewhere for love as her marriage to Marcus falls apart; Billy Rechter, a high school basketball referee; Frank Worrell, a newspaper reporter who gets caught up in a gambling scheme engineered by Bobby G, a former gangbanger who now has a lucrative bookmaking business; Nancy Kapist, a newspaper editor who's Frank Worrell's boss and part-time lover; and Scott Venturi, the coach of Jamal's high school team who will do anything to get a college coaching job, even if it means using Jamal to get it. All these characters' lives are intertwined against the backdrop of big-city basketball as Jamal goes through the system from grade school through high school.

The author obviously has firsthand knowledge of high school basketball. It was fascinating to go behind-the-scenes to learn how players are recruited and brought up through the system. I learned about the role that the National Athletic Union (NAU) plays in running summer camps, where players are subjected to weeks of intensive training. It was equally fascinating to see what goes into the making of a referee. Who would have guessed that making the top ranks of referees was as competitive and tough as becoming a top player. Gambling rears its ugly head even at the high school level as bookmaker Bobby G conspires with reporter Frank Worrell to suck bettors into his scheme and make a killing in the playoffs. All of these elements come together at the end to make for an exciting and violent climax.

The editing for my Smashwords version was very good. I did notice an occasional typo, but not enough to affect my enjoyment of the book.

Bottom line: A very enjoyable book with an engaging story, interesting characters, and an exciting build-up to a dramatic climax.

You have subscribed to alerts for Yale Jaffe.

You have been added to Yale Jaffe's favorite list.

You can also sign-up to receive email notifications whenever Yale Jaffe releases a new book.