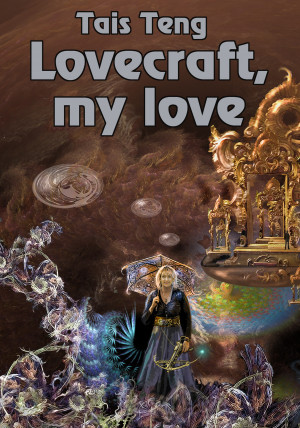 Tais Teng is a pseudonym for a Dutch fantasy and science fiction writer, illustrator and sculptor. His real name is Thijs van Ebbenhorst Tengbergen and he was born in 1952 in The Hague.
Together with Jaap Boekestein he is the originator of Ziltpunk, optimistic climate fiction set in the Netherlands. The E-books Een horizon vol Eilanden and Buitendijks, vier ziltpunkverhalen are part of the series.

Tais Teng has written more than a hundred and twenty novels for both adults and children. He has won the Paul Harland Prize, the Dutch Hugo, four times. His books have been translated in German, Finnish, French and English. One of his books, The Emerald Boy, has been published in the USA. He recently sold the stories Embrace the Night and And the Sky is filled with eyes to the Night Land site.

His English short story collections Lovecraft, my Love and Embrace the Nght and Other Stories are available at Smashwords. 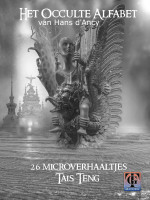 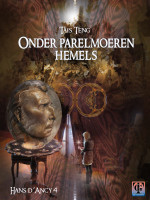 Came across a very positive review on Europa SF, that reminded me I still had to read this one. So I did and the reviewer didn't exaggerate a bit. Which I new already, of course, because Tais Teng may be called the patriarch of Dutch speculative fiction. That's not only because of his enormous production, more than a hundred titles, but also because of his unfathomable imagination. Where most writers manage to translate only one original idea into a story, Tais Teng nowadays translates ten original ideas into one story. Fortunately for the reader the stories in this collection are a bit more mundane. Which means that you only have to read them once to grasp the ideas behind it. Yet many of the stories here are the best the Dutch SF scene has to offer, and some of them even rank among the best in the world. I can only hope that one day I will be half as good.

So what have we got. Twenty stories, mostly SF and when they can't be classified as pure SF they are a crossover with at least a SF back story. I am not going to discuss them all here, but I will try to give you an impression by digging a bit deeper into one story that's also available as a free download. Read about it below after the spoiler alert.
The bottom line necessarily comes a bit early in this review then: If you like SF and are willing to look beyond mainstream Anglo-Saxon SF, then you will find many jewels in 'Lovecraft, My Love'. At $4,99 it's a downright steal.

[spoiler]
In the story Palimpsest you are confronted with a battle between men and elves. A group of warriors manages to destroy the stronghold of a much hated elven lord by means of the forbidden element iron. But when the men are on their way to their hideout, the other elves track them down. The attack is set up in such a way that the iron can't protect the men.
Later the leader of the elves brings the dead men to their village. The dead leader of the men asks his wife to end the animosity between elves and men, because there is much more at stake than the relation between the two races. As a proof of goodwill the newborn son of the leader will be raised as an elf. Mankind has to promise not to excavate the deadly element iron. The wife accepts unwillingly.
So far it looks like an ordinary fantasy tale. But then a deeper level show up, when the mother visits her son at the castle of the elves. He shows her a window through which she may get a glimpse of the real world. Here we have the SF layer: the world is dead, completely destroyed in an all-out nuclear war, completely devoid of life. The world men and elves live in is a construct, 'written' over the old reality, a palimpsest.
The mother however is not able to put her hatred aside and in the end she manages to destroy the elves, who can't stand the sunlight, by means of magnesium flares. As soon as there is nothing left of the elves but smoking corpses, the world begins to fade.
[/spoiler]

You have subscribed to alerts for Tais Teng.

You have been added to Tais Teng's favorite list.

You can also sign-up to receive email notifications whenever Tais Teng releases a new book.