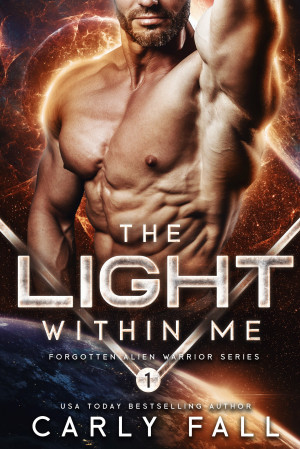 The Light Within Me

Rated 4.67/5 based on 9 reviews
A shy, awkward social misfit. A man not from this Earth. A deadly enemy. More
2013 READER'S FAVORITE BRONZE MEDAL BOOK AWARD WINNER

A shy, awkward social misfit. A man not from this Earth. A deadly enemy.

Abby, a journalist, may soon be out of a job if she doesn’t land a groundbreaking story and feels she just may have stumbled on it when she meets Noah.

As head of the military group dubbed the Six Saviors, Noah is from another world. His sole purpose is to hunt down the evil of his people that was unleashed on Earth hundreds of years ago. Anger and the need for revenge are his constant companions.

Noah tries desperately to fight his attraction to Abby so he can keep his focus on his mission. But when Abby gets dragged into the evil and mayhem from Noah's world, he realizes that maybe with Abby he can find a home here on Earth...if he can save her in time.
Download: epub mobi (Kindle) pdf more Online Reader
lrf pdb txt
Price: Free! USD
Add to Library
Create Widget
Tags: romantic suspense paranormal romance fantasy romance science fiction romance alien romance scifi romance romance ebook romance adult romance alpha alpha alien

Very detailed one. I like the author's way of story telling. Noah is genuine.
Knowingly Hudson telling to his daughter "I was just about to hit on you,” -- nope..not good to me. that could have been avoided in places. Though Hudson wanted to help Noah to realize his feelings for his Abby, he could have opted other options than this. For this alone I rate this lower.

This is a fun and thrilling sci-if romance novel. I loved everything about it and I highly recommend that you read it. Keep up the good work.

Thoroughly enjoyed this book. Would highly recommend this story for lovers of science/fiction, paranormal/romance , fantasy/romance.

Noah's character was not only hot as, but well-written, as were the other members of the Six Saviors.

Their home-world was written in a very descriptive manner and I had no problem whatsoever imaging it as I read along.

The surprising plot-twist with Abby took me unawares, I totally didn't see that one coming.
Great story.

(review of free book)
ccdoodlebug reviewed on May 26, 2013
(no rating)
Wow, just found a new author to follow. I found out about this on Bookbub. Read it yesterday and have since been making strong inroads on the other books. The characters are different and well drawn. The plotting from book to book is consistent. The universe that has been developed is also consistent and interesting. I will be waiting for future books.

Again a series I discover when it’s finished or nearly … I missed the 6 first books and now that I’ve read book1 I do regret not having read it before.

Carly Fall created an interesting universe and I enjoyed a lot her vivid descriptions of SR44 where the inhabitants are made of colourful smoke, she took the time to describe their environment but also their culture and ways of life and the history. For this story I think it was something really important because without it I couldn’t have related to the six saviours, I wouldn’t have understood their dilemma, their mindset as well as I did. It’s the first book but it gives us solid background info to immerse ourselves in the universe she created.


Noah is a warrior but a disillusioned one … he lost hope to go back on his planet one day since it’s only possible if they complete the mission that was assigned to them. Unfortunately, the one who prepared the said mission didn’t take a lot of things into account … if it was really short one the absence of contact with their world and family was understanding but the situation they are confronted to is way worse than the one they were told and believed… hundred years later the mission is far from completed and like all warrior Noah is wearing down. He still has pride and he does it job but he is dull. Worse they were told they couldn’t love or they would loose their immortality or slow aging and their original form making a return impossible. So when the bad guys are reproducing and killing, the good one are alone with only their mission as an objective.

Really, I had some difficulties to understand why they didn’t give up before and I admire their courage… alone in another world without anything from home that must be hard and I can’t understand that those who send them didn’t think of something if it was longer than they expected, no they are just left to themselves. Noah is their elected chief, so it’s even more responsibility for him but until now he managed. However when he meets Abby, he is attracted to her and her voices without understanding why…for the first time he is smiling again and hoping even if he is fighting his attraction putting his duty before everything else.

Abby is different from other, she never really fitted and the dead of her mother when she was a child didn’t help. While her mother supported her love for knowledge and difference, the orphanage made her depressive. Now an adult she still lives a little isolated, with a few impersonal contacts. She isn’t happy with her life but she goes on, her work as a reporter isn’t satisfying her anymore but it pays the bill and she still hope it could help her to find her mother’s murderer. When she sees Noah on a picture of a crime scene she is knows she saw him somewhere but more than that she can’t resist the need to contact him and the connexion is immediate she trust him and can reveals secret to him however even if she loves him when he make it clear that he won’t be completely in the relationship, she prefers to stop there. When she hears the truth, her decision doesn’t change, she loves him and because of that she can’t ask of him that he renounces to what he is…. But she is different and when she attacked, Noah won’t resist anymore he must protect her even if his brothers in arms don’t agree.

I appreciated that the romance took sometime, after all a lot is in the balance and after years of putting is job as his sole priority I couldn’t have imagined Noah to make a 180° after a few hours. He is torn between his pride, his honor and Abby that make him feel alive for the first time.
What i regretted is sometimes the jump in time, for example when Rayner explains what could save her, we don’t see the ceremony just the result after and i would have loved to get more details.

The action is fast, the tension high at moment and the romance sweet, I couldn’t resist. If you are looking for a steamy sci-fi romance, a paranormal romance with aliens, this is a good try and even better you can get it for free on smashwords so no reason for not giving it a try. I really hope i will get an opportunity to read the rest of the series

The Light With Me by Carly Fall
The Six Savior's Series Book 1
Noah is from out of this world. Literally. He is from the planet SR44. Sent here, to earth, with five of his warrior brothers to recapture twelve escapees from the Colony. Twelve men who are evil to the core. What was to be a quick mission has turned into over two hundred years. Noah is existing not living, that is until he meets Abby.

Abby has never felt that she fit in anywhere or with anyone. When she meets Noah to ask him about the work he does as a criminal profiler with the police she suddenly has a peaceful feeling. Like she's finally come home. Only life isn't that easy and there is more to Noah than meets the human eye.

This was a unique paranormal. The six men from SR44 are given unique warrior bodies for their stay on earth, but those bodies come with certain restrictions. There are life changing choices for our hero and heroine and some unique surprises as well. This first book in the series gives the reader a taste that will definitely bring them back to savor the rest of the stories of these men. The author did an excellent job of creating unique characters and personalities for each warrior.
**Sexual situations and language.
http://justjudysjumbles.blogspot.com/2011/12/e-books.html

This was my first read by author Carly Fall, and with this first in a series, I am HOOKED! Ms Fall's delightfully wicked, cheeky and snarky narrative brings the six warriors and the heroine to life making them instantly likeable, loveable and leaves you feeling invested in them. You also get a feel for each individual personality which seems to fit their unique abilities and vice versa. The brief history of their origins, their home world SR44, was very detailed – their society and way of living, their forms, colors, sights and sounds. With all that knowledge, the warrior's desire to return home was palpable and understandable. There were some interesting twists that I suspected or even found a little predictable, but it was more fun seeing the characters taken by surprise. This story had a lot of suspense and a healthy dose of sizzling heat, but I enjoyed the sweet, romantic factor the most. The characters showed their vulnerabilities which made me feel invested in them.

This story does not initially grab you from the synopsis but this was a surprisingly well-written, imaginative, fast-paced story with lots of passion and great characters. Will look for more from this author.