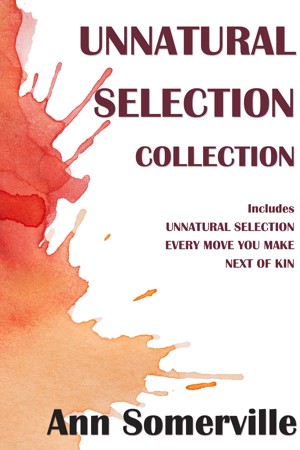 'Unnatural Selection'
Four years ago, Nick Guthrie nearly died from a brain tumour until he received an experimental treatment that saved his life, even though the treatment brought bizarre and permanent side effects. Now he drinks fake blood to live, and has had to have his new long canines capped, but it's a small price to pay to keep doing the job he loves. He's a cop, part of a London Met Police Murder Investigation team.

'Every Move You Make'
Nick and Anton have settled into a comfortable arrangement with Nick dropping over on his free days for sex and company. This suits Nick just fine - even though he knows Anton wants more. Attending a glamorous event pushes them into the public eye as a couple, leading to unmerciful teasing from Nick's friends. He doesn't mind too much until the attention turns deadly, and he must discover who's harrasing his friends and lover, before somebody ends up dead.

'Next Of Kin'
Nick and Anton have settled happily into married life. But on the eve of their 3rd anniversary, Nick disappears, apparently leaving Anton for another me. Anton refuses to believe it. His search for the truth takes him half way around the world, while Nick's friends work to discover what really happened to Anton's husband.
Available ebook formats: epub mobi pdf lrf pdb html
First 20% Sample: epub mobi (Kindle) lrf more Online Reader
pdb
Price: $5.99 USD
Buy Add to Library Give as a Gift
How gifting works
Create Widget
Tags: mystery science fiction mm gay romance
About Ann Somerville

“Unnatural Selection” is told in the first person by Nick himself. It’s clear he’s made some hard, and unpopular, choices in his life, that make him doubt if he will ever find someone to accept him for who he is, policeman, vee, and all. But he’s not one to cry over having a hard life. The mystery of the serial murders is engrossing, and the revelation of the real culprit near the end is truly a surprise.

Despite the tension created by the stalker, “Every Move You Make” is largely a sweet, even mushy story about two men realizing how much they mean to each other. Like the first book, this story is told in the first person by Nick. Although Nick’s status as a ‘vee’ plays a small role in this mystery, it’s much less about that and more about the relationship between he and Anton.

Unlike the first two books, which were told by Nick, this last volume is all about Anton, told in the first person by him, as he marshals his friends and family to help in the search for Nick. The real reasons behind Nick’s disappearance are very sinister, but I for one figured them out long before Anton did. Still, guessing what happened doesn’t spoil the story of following Anton as he attempts to find and rescue his husband.

All three novellas in this series are quite good. They lack the depth and drama I’ve come to expect from this author, which is why I’ve only given the collection three stars, but they’re quite good reads. I didn’t get as emotionally involved in the characters as I might have hoped, but the books are still entertaining. Like any speculative or science fiction, you have to suspend belief just a little, but the idea of a virus like ISH is really no more fanciful than faster-than-light travel, when you get right down to it.