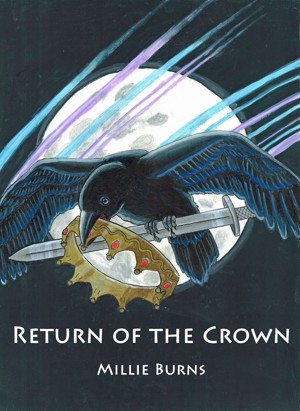 Return of the Crown

By Millie Burns
Rated 4.38/5 based on 16 reviews
Ravyn’s parents are trapped in a magic mirror; her evil Aunt Zelera seized the crown, unleashing the Darkness to ravage the land of Aigerach. Now…the witch wants her dead.

What’s a girl green in the ways of magic going to do?

She’ll bring the Light back to Aigerach and return the crown to its rightful place on her father’s brow or she’ll die trying.

In this classic heroes journey magic i More
Ravyn’s parents are trapped in a magic mirror; her evil Aunt Zelera seized the crown, unleashing the Darkness to ravage the land of Aigerach. Now…the witch wants her dead.

What’s a girl green in the ways of magic going to do?

She’ll bring the Light back to Aigerach and return the crown to its rightful place on her father’s brow or she’ll die trying.

Anxious and alone, sixteen year-old Princess Ravyn sets out on a quest fraught with danger. Armed with nothing but her newfound ability to manipulate the Light, a travel pack of supplies, a snippet of courage and the clothes on her back she sets out to eradicate the Darkness.

A beacon of hope in a dreary world, she draws others to her like a moth to a flame. Connor, a Master of the Light, aims to steer Ravyn clear of the pitfalls of magic. Blade, her best friend from childhood helps her escape Zelera’s clutches. But has he stolen her heart? Ravyn meets many colorful characters along the way – dragons, and harpies, and unicorns. Oh my! Be they friend or foe?

Empress Zelera harries Ravyn’s every step, laying deadly obstacles and traps at every turn. Ravyn can stumble, she may even fall, but if she doesn’t get back up her world will never be the same again.

Millie Burns lives in Orangevale, CA with her husband and three lovely daughters. Along with a severe infatuation of the written word, Millie enjoys a variety of other activities. You might find her out climbing a rock, hiking the backwoods, or clinging to the end of a rope being dragged behind a boat.

Reviews of Return of the Crown by Millie Burns

This was a fine read that I enjoyed. It tells the story of a girl named Ravyn who is sort of “expelled” from her home and her mother and father (the king and Queen) are presumed dead, even though they are really just in a frozen magical state (under a spell) from the queens evil (and I mean EVIL) sister Zelera, who assumes the role of ruler of not just the lands of Aigerach, but the whole world. But Ravyn has other ideas, and she, along with her trusted advisor Connor and best friend Blade (and magical creatures) plan to take back the crown and save her parents. But the evil empress wants Ravun dead, so there is plenty of peril and tension along the way. I enjoyed the ride and can see this being a big hit with teens and middle schoolers, but I will confess that I am well into my forties and though it was great.

Overall I thought that “The Return of the Crown” was an impressive novel that I would have no problem recommending to my friends and family. I was immediately pulled into the story, and thought the author did an excellent job of world-building and keeping the action moving forward. It is very well written, although at times I thought it could use some trimming as the pace seemed to slow with some unnecessary descriptions or superfluous events that seemed to take us in circles at times. But this ranks up there with some of the better YA fantasies I’ve read, and would encourage fans of the genre to give it a shot. You won’t be disappointed.

If it ain’t broke, don’t fix it. “Return of the Crown” by Millie Burns follows in the tradition of fantasy-quest literature, this time the fate of the world rests in a young princess named Ravyn who is coming into her magical powers during her 16th year. She needs to rescue her parents, the King and Queen of Aigerach from the curse of the queen’s older sister, Zelera. Zelera is skilled in the Dark Arts (Bad magic), and the King and Queen (and everyone else) practices the Light Arts (Good Magic). The theme of good v. evil is very front and center in this novel, and there really isn’t much middle ground. I read this in a few nights and it was great right up until the final showdown. Looking forward to reading more from this author in the future.

This novel by Millie Burns was a lot of fun, more so than I’d expected it to be. It was full of adventure and action that kept me interested, and I liked the heroine, Ravyn. She was smart and resourceful and brave and strong. Kind of a tomboy but is relatable. Sometimes I was unclear on a few things, mainly the passage of time and where the characters were in relation to one another (far? Close?) I could never quite get a clear grasp. Also, there seemed like there were A LOT of characters but we never really got to know most of them very well. I know this is standard with fantasy books, but for me it just gets confusing at times when every page or two we are meeting new characters. But I think the plot was good and it made for an entertaining read. I recommend this book for readers aged 12 and up who like an engaging story of action and fantastical adventure.

For me, this book started off kind of slow and it took a while for me to become connected to the characters. I didn’t really like the cover, and it took a while for me to figure out how old Ravyn was, and I wish I would have known this sooner so I could picture her better. But once I got into the story everything started coming together and I really liked the adventures and dangers Princess Rayvn and her friends faced. My favorite was the dragon and the Harpys. Actually, all of the magical creatures were pretty cool. I liked that they had names and actual personalities. Overall I thought this was a very good book and I really liked it. If there was a sequel I would want to read it.

Simply fabulous. Beautiful, descriptive narrative that just sucks you right in from the opening pages. The writing was so descriptive and atmospheric I felt like I was watching a movie unfold before my eyes (note- this would make an AMAZING movie!!) I didn’t want to put the book down once I started reading, as there was always something waiting to happen just around the corner. I loved the depiction of magic in this world and thought it was unlike any I’d seen before. Ravyn and Blade and Connor are great, and so are the supporting characters. A definite must-read for fans of the YA/fantasy genre. Well done.

My ultra-picky daughter read this book in two days, which is incredible! I can’t praise a book high enough that will make her read it cover to cover that fast. I knew that I enjoyed it, but to me the highest compliment is from my pre-teen who usually only likes Twilight (yeah, I know) Harry Potter and The Mortal Instruments. So Ms. Burns is in some fine company indeed! Excellent writing style and I must give a compliment on the stellar editing, as I don’t think I noticed any errors at all, which is very rare for an e-book

Although this book moved along at a slower pace than what I am used to, I felt the message of the book was good. The writing was good enough to keep me involved and turning the pages, but I could put it down. The other reviews give some synopsis detail so I won't repeat. Let me just say that I liked the way the author depicted characters dealing with choices and situations. The writing style switched from different characters point of view which added to the depth of the book. I think if it had been written from just one point of view, I wouldn’t have been as good. Overall, I like the book and liked the enchanted landscape the author created.

I have mixed feelings about this novel. On one hand it is extremely well-written and flows nicely. I’ve read a lot of fantasy and there were some creative and highly original aspects the author explored that I’d never seen anywhere and I found that refreshing. However, much of it just felt so familiar it was almost predictable. While there were some new angles (seeing the threads was very cool), most of the time I just felt like I was reading a different version of a story I’ve already read somewhere before, and the archetypes and characters were pretty stock and standard. No real thinking outside the box here which is something that is required to earn the highest praise from me. But if a tried-and-true fantasy is what you like, then you will love this one. The prose is lovely and the shorter chapters give it a brisk pace. While it didn’t exactly blow my mind, it was a nice read that I’m sure others will enjoy.

I loved this book! Fantastic fantasy adventure suitable for all ages. The heroine, Princess Ravyn, is a teen, but this isn’t just another YA fantasy book. There is little to no angst, and it is not a romance (thank God). The writing very strong and the plot is compelling and intelligent enough for adults to be hooked as well. Recommend for fans of the fantasy genre, as well as action or adventure. Would love to read more from this author in the future.

You have subscribed to Smashwords Alerts new release notifications for Millie Burns.

You have been added to Millie Burns's favorite list.

You can also sign-up to receive email notifications whenever Millie Burns releases a new book.