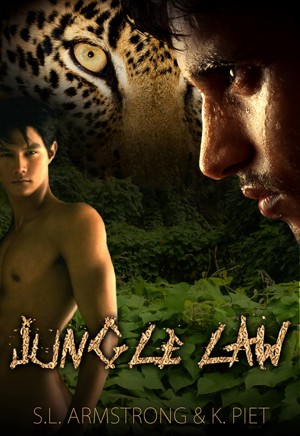 Rated 3.67/5 based on 3 reviews
Leopard shifter Kaanan is accustomed to dispatching poachers that encroach on his territory. When a young innocent from the hunting party escapes his wrath and grows ill in the jungle, he is moved to pity. More
There is a rainforest in India that the wise poachers avoid. Few who venture in ever return, and those that do rarely come back all the way. The leopards in this forest have a protector who walks the worlds between leopard and man, but who calls the leopard kin and the human only enemy. When a frightened boy escapes from the latest hunting party to feel the protector's wrath, he tracks the boy down, determined to leave no survivors. But when he comes fact-to-face with the exotic, defenseless boy, he cannot bring himself to end that life. Instead, what he has reviled for years becomes his constant companion. That is, until the humans dare to set foot in his forest once more.
Download: epub mobi (Kindle) pdf more Online Reader
lrf pdb
Price: Free! USD
Add to Library
Create Widget
Tags: leopard first time interracial gay romance shifter virgin sweet romance interspecies
About S.L. Armstrong

S.L. Armstrong and K. Piet met a handful of years ago through a joint love of Tolkien fanfiction. After a couple of years of casual friendship, they put their heads together and began writing fanfiction. It didn't take long before fanfiction wasn't enough and they began to write in their own worlds. Now, they jointly publish their work through their publishing venture, Storm Moon Press LLC.

Not too bad. Annoyed me a bit that the dialogue form wasn't consistent. One minute neither character could string enough words together to form a proper sentence and the next minute both were speaking full on sentences and then back to broken ones again...

I have to say that this books adult-content rating is appropriate, it reads: This book contains content considered unsuitable for young readers 17 and under, and which may be offensive to some readers of all ages.

I had not paid much attention to that warning when I started reading it, a shape shifter, LGBT romance genre sounded like a good read.

This actually is a good read.

I liked many parts of the storyline: the guardian leopard shape-shifter protecting the jungle, the rescuing of the 'innocent' young man, them falling for each other and well I can't say more without giving the ending away.

However there are two things that take away from this book for me, they might not be bothersome to others though.

The first was that the author says 'the boy' is a year into his manhood. I would hope that the author is implying that manhood is 18 and hence 'the boy' is 19 years old, if not than this is disturbing.
Throughout the whole story references are made to the 'youthfulness' of the boy, but I decided to take them in comparison to Kannans age, whom is stated have been old enough to have produced cubs more then once.

This story follows a tread that I have noticed a lot lately in the gay romance genre, of having a large age differences between the lovers, like twenty plus years and having one of the partners being just barely out of their teens.
I do not care if we are talking m-m or f-m relationships, that does not sit right with me. It smacks too much like ... well, let's just say that it creeps me out (again, just my thoughts on that).

Again I will say not everyone will agree with my review, but excluding the two issues that I have with the story it is a good read.

If you over look the age thing, skip over (or exclude) the overly detailed sex, then you would have a perfect five star gay shape-shifter short story.