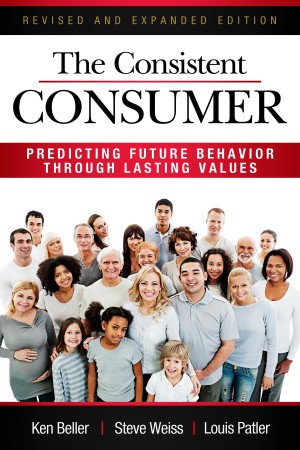 By Ken Beller,
Louis Patler,
& Steve Weiss
Behavior-based demographics are dead. Instead, values-based systems are what will ensure the success of your next marketing campaign.

Values, not past behaviors, help you better define and understand today’s diverse consumer groups and more accurately anticipate how these distinct populations are likely to behave in the future—and what they are likely to buy as a result. More
The advantage you'll gain from reading The Consistent Consumer is knowledge of the future - because one of the best predictors of the future is the values we hold. This is one of the most important books on customers to come out in years."

Behavior-based demographics are dead. Instead, values-based systems are what will ensure the success of your next marketing campaign.

The authors of The Consistent Consumer say values, not past behaviors, will help you better define and understand today’s diverse consumer groups and more accurately anticipate how these distinct populations are likely to behave in the future—and what they are likely to buy as a result.

Ken Beller, Steve Weiss, and New York Times best-selling author Louis Patler offer a values-based profiling system with five proprietary Value Populations you can use to quickly and effectively shape marketing strategy and increase the impact if your brand.

With The Consistent Consumer as your guide, you’ll learn how to: make and instant connection with consumers, increase sales by learning what really drives consumer spending, enhance market share with products that speak to core values, motivate groups more effectively with customized messages, and influence consumer buying decisions for years to come.

Cofounder and president of Near Bridge, Inc., Ken Beller is the lead author of the highly praised book, The Consistent Consumer: Predicting Future Behavior Through Lasting Values which brings powerful insight into values-based generational profiling and outlines the emotional triggers that consistently drive consumer and employee decisions.

Ken is also the lead author of the award winning book, Great Peacemakers. Winner of 38 awards, and endorsed by 3 presidents and 3 Nobel peace prize winners, it tells the inspiring stories of 20 peacemakers in recent history and is being taught in secondary schools and universities across the country and the world.

An accomplished international business leader, Ken has lived and worked in 20 countries across North America, Europe, and Asia. Throughout his career, he has successfully developed, implemented, and run multicultural and cross-functional initiatives for some of the world’s most prominent companies, including General Electric, Daimler Benz, Applied Materials, and NASA.

Well versed in all aspects of large and small business operations, Ken has grown and managed organizations with annual revenues ranging from $1 million to over $120 million and he has been responsible for the operations strategy of a $1 billion worldwide manufacturing organization. He has substantial hands-on expertise in global business planning, acquisition integration, process and product development, engineering, operations, human capital development, and organizational performance.

Ken has received numerous awards including a Presidential Award from General Electric and a Group Achievement Award from the head of NASA for major contributions on NASA's space shuttle's solid rocket booster motors.

Holding a B.S. in Chemical Engineering, he is a graduate of GE’s prestigious Chemical and Materials Management training program. He serves on a corporate board and is a member of several community not-for-profit boards.

You have subscribed to Smashwords Alerts new release notifications for Ken Beller.

You have been added to Ken Beller's favorite list.

You can also sign-up to receive email notifications whenever Ken Beller releases a new book.