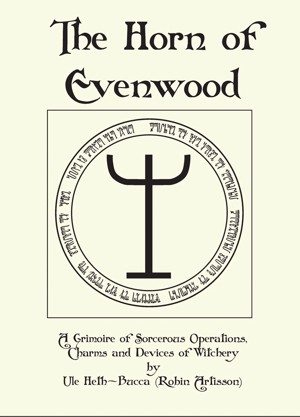 The Horn of Evenwood A Grimoire of Sorcerous Operations, Charms, and Devices of Witchery

Robin Artisson has been studying folklore and supernaturalism and practicing sorcery- in the true historical meaning of the word- for 14 years now, which is far longer than most people said he'd survive. He's from South Louisiana, of Bernician (Anglo-Pictish) heritage, but also of Irish, Cajun and Sicilian descent. He grew up in the shadow of the last home of active and accepted supernaturalism in the United States: New Orleans, and the entire hairy, scary regions far south. Katrina? Fuck Katrina! The Spirit of the Great Sultan of the South has endured many hard blows of Fate before, and will endure forever.

Robin is an herbalist, a devoted deep ecologist and animist, and a skilled practitioner of trance-healing and divination. By this, we mean to say that Robin spends a good deal of time inducing altered states of consciousness whereby he may (at times) interact with extra-sensory reality for the purposes of finding guidance for himself or others, or for healing purposes. He performs these works as an Owl-Doctor or healer (some say "witch") of pretty decent folkloric learning, given to a mind of animistic principles.

Robin is a learned holistic healer, augurist, reader of omens, and a skilled dream interpreter. He is passionately in love with chess, very dark ale, sushi, religious philosophy and debate, historical re-enactment activities, occult studies, historical books and research, systems theory, the Robin of Sherwood BBC series (that is not the source of his name, however) and writing. He is a father and husband, and a student of life.

Robin holds a BA in European History/Anthropology, an MA in Criminal Justice and Policy Science, and an MA in Marriage and Family Therapy. He currently works in the field of Trouble and Pernicious Mischief, all alongside his writing, of course. He has written (currently) four books and countless articles online and in various publications. Chances are, if you've hung around the "pagan" internet, (such that it is) you've heard of him.

You have subscribed to alerts for Robin Artisson.

You have been added to Robin Artisson's favorite list.

You can also sign-up to receive email notifications whenever Robin Artisson releases a new book.