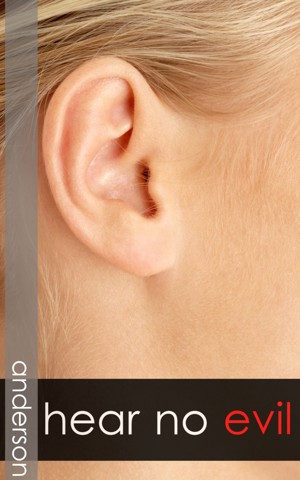 Hear No Evil: A Short Story

I read whatever I can get my hands on, but I particularly love YA and paranormal fiction. I watch way too much TV (Curse you, Fringe!), and when I'm not writing I'm usually jogging, biking, or gardening.

It is simular in ways to stories by Stephen king but I would say thats a good thing. Some nice shocks as David Blake points out, the cinema part was a complete suprise. I really enjoyed this.

This was an interesting and enjoyable story, but I was a bit disappointed with the ending as it felt a bit too abrupt.

I suppose the plot of this story has echoes of Stephen King's "The Dead Zone", or the movie "What Women Want" but it's a good little tale that unfolds nicely. Although the events take place over quite an extended period of time, Nickie Anderson keeps the relevant scenes short and punchy so that the reader's attention never wanes.
The intrigue builds up considerably as the story progresses, there's a great moment during the scene in the cinema which catches the main character - and the reader - completely by surprise and takes the story to a whole new level.

I really like Nickie Anderson's imagination - for example, the concept in this story that sounds have colours was inspired. She's innovative in the ways she uses the medium of the written word both in this story and in the other work of hers that I have read, "Jorinda", and that's something to really be applauded.

Psychological Thriller for teens. Short story only 50 pages. I like the background, hard to follow at places, now I understand why some parts are highlighted, since most of the dialogue is in one persons head.

You have subscribed to alerts for Nickie Anderson.

You have been added to Nickie Anderson's favorite list.

You can also sign-up to receive email notifications whenever Nickie Anderson releases a new book.