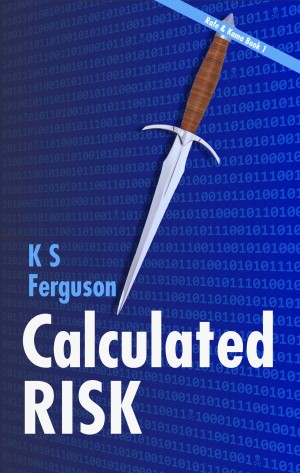 By K S Ferguson
Rated 4.33/5 based on 3 reviews
Self-made security professional Rafe McTavish agrees to investigate his brother-in-law's inexplicable purchase of a dilapidated deep-space mining station. When the miners turn violent, Rafe's only ally is Kama Bhatia, computer hacker and spy, at the station on a mission of her own. Now they must put aside their mutual attraction and distrust to unravel fraud, blackmail, and murder. More
Rafe McTavish, charming self-made businessman, owns the most successful private security firm in the galaxy. Estranged from his family since his wife's bloody suicide fourteen years earlier, he's nevertheless honor-bound to find out why his brother-in-law, CEO of the mega-corporation EcoMech, has placed his reputation and the company's future in jeopardy by purchasing a dilapidated deep-space mining station.

Kama Bhatia, outlaw computer hacker and corporate spy, works for socialistic non-profit corporation Oasis, in opposition to the ruthless mega-corporations that control society. She has a mission of her own at the mining station: retrieve a secret document accidentally leaked to the station manager—before he can sell it to Oasis' rivals. If she fails, Oasis loses its best hope to rescue the masses from under the iron boot of the mega-corporations.

But at the station, the crooked manager is missing, and the locals are far from friendly. Rafe takes a savage beating from miners who blame him and his corporate employers for fraud perpetrated against them. His safety relies on Kama, an ally no fonder of corporate executives than he is of criminals. With their own lives and the welfare of millions at stake, can they put aside their mutual attraction and distrust to unravel fraud, blackmail, and murder before the tide of violence overtakes them?
Available ebook formats: epub mobi pdf rtf lrf pdb html
First 20% Sample: mobi (Kindle) lrf pdb Online Reader
Price: $0.99 USD
Buy Add to Library Give as a Gift
How gifting works
Create Widget
Tags: thriller murder action science fiction futuristic dystopian jd robb romantic elements adventure
About K S Ferguson

About the Series: Rafe & Kama

Charming CEO Rafe McTavish teams with corporate spy and computer hacker Kama Bhatia to solve crimes in a future where mega-corporations decide what's legal—and who gets away with murder.

You thought it was difficult solving mysterious crimes on Earth? Then try that in space!

Lately I have been getting more and more fascinated by sci-fi movies and novels, especially the grim and dystopian ones. Although “Calculated Risk” isn’t really a dystopian story, it is set in a not too far away future when humanity has gotten through some great challenges. By a happy coincidence I happened to come across this book, and had a great time reading it.

As a reader you embark on a journey of corporate secrets, off world colonies, intrigue and dimly lit corridors of a certain space station, soon to be the epicenter of a series of mysterious events. In the midst of all this, appears a man with a dark past – Rafe, the CEO of a successful private Security Company. At first Rafe strikes you as the stereotype of a chauvinist businessman, charming, intelligent and fast paced in his decision-making. But is his façade telling the whole story?

You are guided through the storyline by a mix of relaxed and atmospheric scenes - personally my favorite ones, and something I wouldn’t have minded seeing more of – and then also more action packed sequences. The action is splendidly narrated, and really keeps you on tenterhooks. Unfortunately the book started off a bit too fast, at least for my taste. I partly was a bit confused by where and when I was, and how I had gotten there. The protagonist also revealed some of his deepest secrets before I really had a chance to get to know him. This made me feel a bit awkward at first, similarly to how you might react if a stranger on the metro suddenly opens up to you… However, as the first chapters had passed by, this feeling dissipated and gradually I started to feel I connected to the honest, but toughened by life CEO Rafe and the idealist hacker Kama. It didn’t take long after that until I wished to know them both better.

In conclusion, “Calculated Risk” was a quite interesting crime-thriller to read, which definitely stimulated my imagination. Maybe “Calculated Risk” should have been a bit longer, so that intrigue and relations had more time to mature. But except for that, I found this book most rewarding to read, and it left me with a craving for more sci-fi mysteries. For those of you who love mystery-thrillers, and also secretly dream of signing up for the Mars One Program, but don’t quite want to give up the comfortable warmth of you armchair, K S Ferguson has just offered you the perfect getaway.

I loved this book; I devoured it in just a few days because I couldn't be persuaded to put it down!
The writing style is lean and taut, which matched the tenseness of this sci-fi thriller perfectly. The pace was quick and always had me waiting eagerly for the next disaster. It slightly reminded me of noir-crime, because it had some of those lovely turns of phrase ("triaging a holocaust"; "felt like a violin string, dug out of something's guts and stretched far too tight").
The characters were hard-boiled and tough, even though it was obvious that most of them had a heart of gold underneath.
But it also had moments of humour and tenderness, which I thought gave the book a well-rounded and realistic tone.
I really liked the characters. Rafe McTavish reminded me of a Bruce Wayne billionaire playboy type, only withot the dressing up in a mask and tights to solve crime. As 3D and well-written as the main characters were, I was pleased to see that all the minor characters received the same treatment. My favourites amongst the minor characters were Janice Fisher and Greg. They always made me smile when they were around. I also liked how a lot of characters had a secret that they were trying to hide. It made working out the "whodunnit" of the crime that much more difficult and interesting.
Not that I was able to figure out the "whodunnit" before it was revealed, despite trying. Although, to be honest, I prefer just sitting back and enjoying for the ride in crime thrillers, watching the characters do all the thinking! I was surprised by the revelation, but it also made perfect sense.
The ending was the perfect end to the book, satisfactory, but still leaving me hungry for more. I can't wait for the next book in the series.

I enjoy books that don't stick religiously to one genre, and this one sounded like it had a bit of everything. And indeed it does--some sci-fi, some mystery, some thriller, some romance, and a pair of interesting characters who reminded me a lot of The Girl With The Dragon Tattoo.

It's mostly mystery, though--two mismatched heroes thrown together by chance, stuck on a dangerous space station trying to solve the same crime for different reasons, not knowing whether they can trust each other but being forced to try. The mystery's deftly handed, and there are some exciting action sequences too.

I would have preferred a bit more sci-fi--the action mostly takes place on a single space station, and I'd have preferred to see a bit more of the author's futuristic world, because there are some interesting hints and ideas dropped about it without you ever really seeing it first-hand. However, judging from the ending (which I won't spoil for you), I get the idea that there's a lot more of the world to be revealed in the sequel, so maybe the author's just biding her time.

The best part of the book is definitely the two heroes, though. Rafe and Kama are really interesting characters with a lot of surprising skeletons in their closets and I really enjoyed seeing them battle against their demons throughout the book. It was an enjoyable read and the sort of story that could make a really interesting movie.