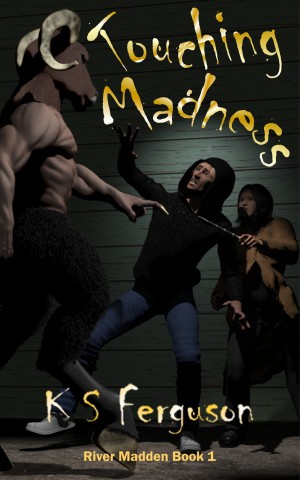 About the Series: River Madden

Follow the adventures of hapless schizophrenic River Madden as he tries to make sense of a multiverse where demons are real and Neanderthals and Raptors occupy parallel dimensions.

Touching Madness was an excellent read. River is easy to relate to, and his unusual way of perceiving the world brings a unique voice to the story. He, and the rest of the cast, are interesting and engaging. I am very much looking forward to spending more time with the characters in the second installment, especially the Sootball. The plot is twisty, intriguing, and action packed but, thankfully, lacks the plot holes that so many books these days seem to feature. As I read the story, I found it difficult to catch my breath, and just when I thought things couldn't possibly get worse, they did. And yet, despite the action, suspense, and ever rising tension, I found myself quietly chuckling (and even laughing out loud) at the most unexpected moments. All in all, this book is definitely worth reading.

As I read this book, I had to constantly remind myself "But you don't like this genre." A trusted source pointed me to this story, and I'm so glad I listened to them instead of my "little voice." I found this story to be a real keeper...and I'm picky. When it comes to reading, if something doesn't grab my interest pretty quickly, and keep it, I generally move on. With Touching Madness, the thought of not coming back to it never even occurred to me!

I can only reiterate what the reviewers before me have said...the story is not perfect. There are a few things that would benefit from some "polishing." BUT, these issues are overridden by the quality of the development of the main character, the imagination involved, the humor (mostly wonderfully subtle, which makes it even better), and the sensitivity with which the author handles the underlying theme of psychosis. I thoroughly enjoyed the main character, River Madden, and found him, though definitely suffering from schizophrenia, a very lovable, relatable, and endearing young man...as well as innocent and vulnerable. I thought the author hit the mark in developing River's character and showing us multiple facets of his personality: funny, scared, caring, lonely, brave...and actually very smart and witty.

I will be waiting for the sequel, and I suspect that, from this author, things will only get better and better.

'Touching Madness' has a great narrative voice that drew me in right from the first page. The writing style is quirky and humorous, which made it really fun to read. It's chatty and written in first person, so I was able to really get into the main character's head.
The main character, River Madden, is a homeless man suffering from schizophrenia. Despite the overall humorous tone of the book, I thought that River's condition was handled with sensitivity and intelligence. It is never used to mock him, neither is he ever reduced to just his illness - his schizophrenia is a part of who he is, but there's a lot of other qualities to him as well. I found him to be an inspiring and very likable main character. He was also fun to hang around with, which made me keep reading.
The plot is interesting. It revolves around there being different dimensions, and we get to meet characters from them such as raps (from a dimension where dinosaurs were never wiped out), neans (from a dimension where homo sapiens never developed and humanity descended from neanderthals) and my personal favourites - demons.
From the beginning to the end, the plot was tightly woven and exciting, with never a dull moment. I won't give anything away about the ending, but it was the sweetest thing I've ever read. It made me so happy.
This book is part of a series and I'm looking forwards to the next book!
I think 'Touching Madness' would be suitable as a young adult book, but would equally be enjoyed by adults. It's charming and poignant and funny.

A lot of urban fantasy is cookie-cutter, especially in a world where everyone seems to be imitation JK Rowling. I took a punt on Touching Madness because it sounded a bit different, and so it proved.

The author's portrayal of a schizophrenic hero gradually discovering that not all the demons he sees are products of his mind hooked me early on, and the narrator (River) especially is a fun and interesting character. There's lots of action and intrigue, but the author did a good job of keeping things moving and not letting the story bog down.

It's not perfect--there are some subplots where I thought the tone was a bit too light-hearted, and there's maybe one climax too many for my taste--but it was an interesting and enjoyable read, with plenty of laughs along with the dark moments. I'll definitely be keeping an eye open for the promised sequel. Quirky, and not at all what you expect.