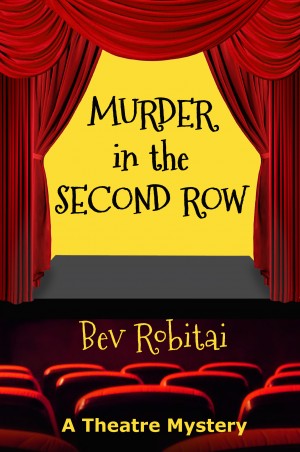 Murder in the Second Row

By Bev
Rated 4.57/5 based on 7 reviews
Many things can go wrong between casting a show and Opening Night. Finding a body in the second row is just one of them. When manager Jessica Jones battles to save the old Regent Theatre from developers, a dead actor in the auditorium is the last thing she needs. Then the police officer heading the investigation starts to take a very personal interest in her. Will the show go on?
Available ebook formats: epub mobi pdf rtf lrf pdb txt html
First 50% Sample: epub mobi (Kindle) lrf more Online Reader
pdb
Price: $3.90 USD
Buy Add to Library Give as a Gift
How gifting works
Create Widget
Tags: crime drama murder mystery acting theatre stage stage crew rehearsal
About Bev

Bev Robitai currently works as a writer, book coach, and freelance photographer while travelling in New Zealand and Ontario in Canada. It's an itinerant lifestyle of year-round summer involving boats and motorhomes and a ski chalet. She writes mostly light crime fiction, sometimes based in the theatre and sometimes straying into post-apocalyptic sci-fi. Her novel Murder in the Second Row was launched in June 2010 in a historic theatre that was also used as the setting for Body on the Stage. A decade of backstage experience gave her the raw material for both books.

A stand-alone novel Eye for an Eye is the tale of a quest for justice, inspired by the actions of a real-life conman whose trail of victims made the author angry enough to imagine retribution - in some very inventive ways...

The Sunstrike novels are set in a post-apocalyptic present day world when a major solar storm has wiped out all electrical technology. They are optimistic survival adventures following normal people learning and adapting to difficult new circumstances.

Reviews of Murder in the Second Row by Bev

Takes a while to get to the murder, but is an enjoyable read.

(reviewed the day of purchase)
Trish McCormack reviewed on Feb. 22, 2013

This novel introduces an engaging caste of characters - both on and off stage. The story moves fast and leaves a satisfying chill at the end. The author clearly knows the theatre world well and brings it to life adding an extra dimension to this enjoyable crime novel. I also loved the link to Agatha Christie and am now re-reading Appointment with Death as a result.

In the acknowledgements at the beginning of the book Robitai writes

To all those who toil tirelessly in theatres everywhere, especially the past and present members of Nelson Repertory Theatre Inc. and the Theatre Royal Trust.

I’ve borrowed many of your finer attributes for the most likeable characters in this book. The nasty ones are of course entirely fictional. (And remember, I had to save some good characters for future books.)

The story is made up but the setting is the real Theatre Royal just as she was before the latest refurbishments, with all her quirky little nooks and crannies.

Like many amateur theatre groups the Whetford amateur dramatic society decides to stage a play that will have wide appeal, written by a "classic" author. Their choice is APPOINTMENT WITH DEATH by Agatha Christie which they hope will be popular.

Right from the start there appears to be someone who is determined that the show will not go on. The theatre itself is under threat by a local property developer who goes into print emphasising the antiquated nature of the building. Somebody keeps shoving cryptic notes on purple paper through the side door and even attempts to burn the building down.
None of the incidents are potential show stoppers until the death in the second row.

I enjoyed the bits of humour, the touches of romance, and the occasional "tributes" to Agatha Christie.

'Yes, right under our noses. Haven't you noticed how Gert looks just like Miss Marple? She may not hail from St Mary’s Mead but I bet she has a shrewd grasp of human nature.' 'Better her than that bloody little Belgian git. Hercule Poirot always annoyed the hell out of me,' said Gazza. 'Such a smug, self-righteous windbag.' ....

'Well, most of the old girl's murders were motivated by sex or passion, weren't they?' said Howard. 'Human nature hasn’t changed much since she wrote her novels, just the world around us. Fewer servants, for one thing.' .....

'Forget C.S.I., give me good old Agatha Christie. Leave it with me, Jack – I shall apply my little grey cells to the problem and try to come up with a solution for you some other way. It'll be the human element that's the key, you know. Motive is everything.'

MURDER IN THE SECOND ROW which appears to be sub-titled "Are you sure we can’t advertise for a tart?" is an enjoyable read made all the more so by the fact that it is carefully constructed and filled with interesting characters.

A good read for those of you who like a good cozy and have an e-reader.

At the Regent Theatre in the small town of Whetford, New Zealand the resident amateur dramatic society are preparing for their next show which, they’ve decided, will be Agatha Christie’s APPOINTMENT WITH DEATH. They can just about afford well-known Director Adam Bryant and have soon held auditions are in early rehearsals when one of the cast members is gruesomely murdered. This comes on top of the news that local developers want to build a shopping mall that would require the bulldozing of the theatre and the local Council, which owns 40% of the theatre, is keen to support the move. Jessica Jones, the theatre’s manager, heads up the campaign to save the theatre and takes on an amateur sleuthing role in her zeal to protect her beloved theatre.

Robitai has done a tremendous job with her setting here, really bringing to life a historic theatre with all its creaks and ghosts and the amateur dramatic society dedicated to keeping the building and its purpose alive. By the end of the novel I was feeling terribly guilty for not supporting my own local theatres more in recent years as I too have spent many happy hours at such places in the past and I liked the way the novel demonstrated the cultural value of such buildings.

There’s also a delightful cast of characters in this classic whodunnit. Refreshingly our leading heroine is not considered a suspect (well only for a moment) and becomes a conduit of sorts to the police investigation, which she doesn’t mind at all given that Jack Matherson, the detective in charge of the case, is attractive and funny. The pool of possible culprits is extensive and their personal stories are nicely varied. None are really explored in great depth but there is enough to get a sense of them as people and as a collective of ‘average’, community-spirited people they are very credible.

The mystery element itself is reasonably straight forward and would need a couple more twists and turns for seasoned readers of the genre, but the plot is logical and the big reveal at the end manages not to go too far overboard. The humorous tone of the writing, especially the dialogue between Jessica and Jack, suits the light, fun tone of the novel and there really is a lovely, genuine feel to the story. I will be keeping an eye out for more from this talented debut author.

As a New York City actor, how I loved soaking up the atmosphere of the New Zealand Regent Theatre that witty heroine Jessica Jones manages so capably and lovingly. On top of her usual chores of running this charming, decaying 130-year-old relic with its leaking roof, and placating those who are preparing the next production, Jessica finds herself thrust into the role of amateur sleuth. She must solve the mystery of the body in the second row and find out who is writing those demented threatening letters. She has plenty of suspects: likable and not so likable actors, those who toil behind the scenes (and do it all for love), and greedy developers who want the theatre to fail. Jessica gets needed assistance from outside sources and, in the process, finds the man of her dreams. Throughout this fast-paced, delightful mystery, I was rooting for Jessica and the theatre to succeed. I eagerly await further adventures of this motley crew.
Reviewed by Kay Williams, Co-Author, Butcher of Dreams

I really enjoyed the author's descriptions of her characters. So well done in a few words. For those of us involved in the theater...even in a small way, it was easy to recognise people we have met.
The plot is well formed and I look forward to reading more of Bev Robitai's work

Got stuck into the book today (travelling to work) and it reignited SOO many memories of the theatre I know....the smells, the carpet, the dodgy steps, the overused glass mugs, the instant coffee, the stocks of props/furniture/fabrics, the jokes... Awesome work. It really took me on a trip back in time to how the theatre used to be! Cool yet spooky to be reading a book set in a place I know so well. The pace kept up nicely and I loved the romance with Jack. Can we have a Jessica for our theatre, please? She’s such a handy person to have around!

You have subscribed to alerts for Bev.

You can also sign-up to receive email notifications whenever Bev releases a new book.