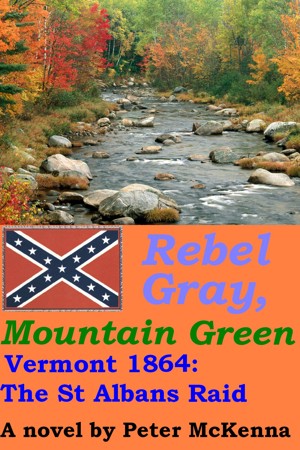 By Peter McKenna
Rated 4.00/5 based on 1 review
Rebel Gray, Mountain Green is an historically accurate tale of the Confederate guerrilla raid on the quiet town of St Albans, Vermont in 1864, and the citizens' resistance. Illustrated with period images. More
Rebel Gray, Mountain Green is a story of the Confederate guerrilla raid on St. Albans, Vermont in October 1864. Though fiction, it is fact-based: most of the incidents described did happen, and most of the characters are named for the actual participants.

The book begins with a brief account of the conversion and martyrdom of Saint Alban, a Roman Centurion in Britain. The story then follows Bennett Young, the leader of the raid, from enlistment through wartime experiences: Colonel Cluke’s winter incursion into Kentucky, General Morgan’s summer raid into Indiana and Ohio. Captured, he escapes to Canada with his saddle mate Tom Collins. There they are recruited by Confederate spymasters, among them John Wilkes Booth, and sent by sea to Richmond, where newly commissioned Lieutenant Young is briefed by Secretary Judah P. Benjamin on the plan of attack.

Back in Canada, he and Sergeant Collins recruit other escaped prisoners for the raid. In civilian clothes they arrive in Saint Albans in twos and threes during the week before the raid, pretending to be sporting gentlemen. Meanwhile in Virginia, Captain George Conger, 1st Vermont Cavalry, is wounded and sent home to convalesce in St Albans with his beloved wife.

On October 19, the Rebels strike, with Young and Collins declaring the town in the possession of the Confederacy. The people think they’re drunk or crazy, but a few gunshots convince them otherwise. The citizens are herded into the town square, while the raiders go about robbing banks, stealing horses, and trying to set the town on fire.

The townspeople resist: individually at first, then organized by Captain Conger, Ed Fuller the stable keeper, and Sheriff Sherman. An innocent man is killed; Fuller’s son and one raider are wounded in an exchange of fire. The Rebels flee to Canada after skirmishing with a hastily organized posse. In a showdown in Quebec, where the wounded man dies, they are taken in charge by Canadian authorities.

In New England near-panic ensues over Rebel terrorists. The townspeople clear up their own matters, some of it directly with the raiders. Funerals and trials are held. A Confederate female spy shows up in Montreal with vital documents.

Peter McKenna has been a professional writer in the technical and academic field. Now he is an amateur in the historical novel. He is a native of San Francisco, where he still lives. However he has seen a bit of the world, as a naval officer and as a wanderer on the face of the earth.

It Can't Happen Here!
Imagine a raid on a bucolic Vermont town by a wayward squad of Confederate Cavalry. Imagine "The Mouse That Roared" and "The Russians and Coming..." Imagine what it might look like if General Sherman invested Mayberry and Andy and Barney's great-grandfathers held him at bay with pitchforks. Absurdity is the beauty of this fictionalized account of a true event wherein a band of seasoned Rebel soldiers, at the instigation of John Wilkes Booth no less, capture a small town near the Canadian border and are resisted by carpenters, hostlers, bankers and boys.
Rebel Gray, Mountain Green is a fabulous tale written in a superb clean and honest style, meticulously researched and richly illustrated with period images. Peter McKenna excels in character development and dialect. This is a story after my own heart and I'm green with envy that I didn't write it.

You have subscribed to alerts for Peter McKenna.

You have been added to Peter McKenna's favorite list.

You can also sign-up to receive email notifications whenever Peter McKenna releases a new book.