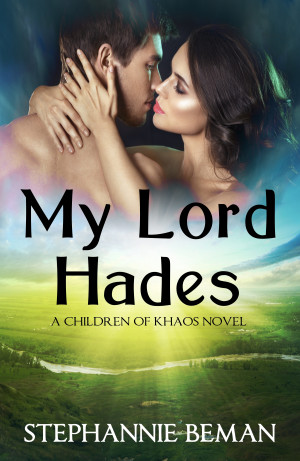 Rated 4.80/5 based on 5 reviews
Betrayed by the Gods he once served, battle-weary Hades promised to never allow another god power over him, but he didn’t plan on the Fates intertwining his future with the stunning woman dancing in the moonlight, or the rise of his Phlegethon nature that demands he claim her as his own. More
Past shrouded in darkness, Persephone, daughter of the earth goddess Demeter, heals from the ordeal that stole her memories and the magic that is an integral part of who she once was. When she meets a stranger in the woods, her life is forever changed.

Betrayed by the Gods he once served, battle-weary Hades promised to never allow another god power over him, but he didn't plan on the intervention of the Fates intertwining his future with the stunning woman dancing in the moonlight, or the rise of his Phlegethon nature that demands he claim her as his own. Persephone has become the siren calling him, promising the completion of heart and soul, but only a fool accepts the gifts of a siren, or fight against the will of the Fates.
Available ebook formats: epub mobi pdf lrf pdb txt html
First 20% Sample: epub mobi (Kindle) lrf more Online Reader
pdb
Price: $3.99 USD
Buy Add to Library Give as a Gift
How gifting works
Create Widget
Tags: gods and demons hades and persephone battle for the underworld heroine has amnesia kidnapping a bride retelling greek myth
About Stephannie Beman

About the Series: Children of Khaos: The Originals

A romantic fantasy series set in a world where gods rule, demons are feared, and humans seek only to survive, the Children of Khaos Universe includes series within series of several standalone and interconnected stories based on the Greek, Roman, and Etruscan mythologies that follows the lives of the gods, the demons, and the hapless humans that get in their way.

Also in Series: Children of Khaos: The Originals

Reviews of My Lord Hades by Stephannie Beman

I really loved this book. I thought it was a great and creative twist on greek mythology which is one of my favorites subjects. Stephannie Beman really did a great job creating a world and a story that sucks you in as a reader.

I have always loved greek myths and this just brings a nice new twist to a great tale. Brilliant.

I've always been intrigued by the Greek myth of Hades and Persephone. However, as a warning to prospective readers, this is not an exact retelling of the classic myth. In this book, Hades fights the Titans to help Zeus become the chief god in exchange for the Sea, but Zeus dupes him and gives him the Underworld instead. In the middle of this, Hades stumbles upon the gardens where Demeter has been hiding her daughter, Persephone, for many years. It's love at first sight, and even as he tries to fight his growing attraction for her, he senses that she is the one who will complete him. I liked the secret admirer part of the book and how they first met, especially in light of the fact that she's never seen a man.

Persephone, however, is only naiive and young on the surface. The truth is, she has secrets hidden in her past--secrets she doesn't remember due to Demeter supressing them. As the story unfolds, we are given pieces to the puzzle until the end, which is a lot of fun as I played the guessing game.

Hades' reason for abducting Persephone is a good and solid one, so he's not the monster in abducting her that he's often portrayed as being in the classic myth. Even so, Persephone was taken against her will and is grasping with her new identity and has to learn who she once was, so she has her personal issues to deal with before she can embrace Hades completely.

PS There are no vampires in the book.
What I liked most about this book is that beneath Hades' hard exterior, he was tender in his love for Persephone, and for those of you who like virgin heroes, he qualifies. He can't kiss a woman without his passion nearly killing her which is why he's never had sex before. This is not a problem with Persephone who is the one meant for him, and when they do make love, it's steamy. So I classify this as a sexy read. And yes, Persephone is a virgin too, and as soon as he brings her to the Underworld, they are husband and wife as is the custom of that time. Oh, and Persephone is not the weakling that is often portrayed in the classic myth either, in case anyone wonders.

This is NOT your grandfather's Hades.

In "My Lord Hades," debut novelist Stephannie Beman breathes fresh new life into a very old story. Her twists and additions to the myth of Hades and Persephone are imaginative, intricate, and rich. I started the book thinking I knew what would happen, but Beman surprised me several times.

Beman has a flair for descriptive language that isn't too flowery or "purple prose." She has an artistic vision that translates onto the page and gives layers to her setting. She uses setting to accent the growth of her characters as well -- fitting, since they are powerful beings with the ability to change setting.

I thought the novel started a bit slow as she drew the characters, but it picked up the pace fairly soon. She is clearly an author with a strong imagination and voice, and I have no doubt that her future work will show improvement in craft.

I look forward to reading more of Ms. Beman's work!

(reviewed 6 days after purchase)
Reena Jacobs reviewed on Nov. 28, 2010
(no rating)
Ms. Beman did a great job giving each of her characters a distinctive voice. Hades was burdened yet honorable. He was a break away from the gloomy Guses who are popular in many works today. Of all the characters, I'd say he was the most tenderhearted. Yet he was caring in a way which didn't detract from his masculinity.

Persephone reminded me of a butterfly or Snow White. Picture the scene where Snow White or any of the Disney Damsels who sing, dance, and just enjoy life. That was Persephone. I worried I'd grow tiresome of her frolicking, but as the plot unfolded, so did other facets of her personality. By the end of the story, there was definitely character growth.

Plot wise, Ms. Beman took liberties weaving this story. Much is the same, so that it had a Greek Mythology feel, but the few deviations here and there really added a flare. It kept me on my toes, since I wasn't sure how the storyline would differ from what I've read of Hades and Persephone in the past.

The characters were well-fleshed. The plot was interesting and fresh. Overall, I enjoyed it. Not bad for a debut novel.

Hades and Persephone have always been my favorite of the Greek myths, so I wasn't sure whether I would love this book or hate it.

When the book opens, we find Hades as a prisoner in Tartarus, tortured by specters of his past. Zeus and Poseidon appear and offer both Kingdom and bride to Hades if he will help them finish the ongoing war with the Titans. It's a simple choice between agony and revenge.

Meanwhile, Persephone is living with her mother Demeter. She's lost all of her powers, but even worse, she's lost her memories as well. Unhappily sheltered, Persephone knows there is something more; something she is missing. And, when she meets the dark, mysterious Hades one day, she discovers what it is.

Stephannie Beman takes the story of Persephone and Hades and adds enough twists to make it new and bring out the underlying passion I always felt was hiding beneath the myth. Her representation of Hades as the smoldering bad boy with a dark, regretful past and a desperate need for the salvation only love can bring is dead on. Meanwhile, Persephone slowly changes before the reader's eyes from a very timid creature to a woman who is more than capable of holding her own.

There were several surprising plot twists (The underworld's first ruler, for instance!) and even some humor in the form of the Nymphs.

In short, all I have to say is that if Hades came thundering towards me on a chariot, I most certainly wouldn't argue ;)