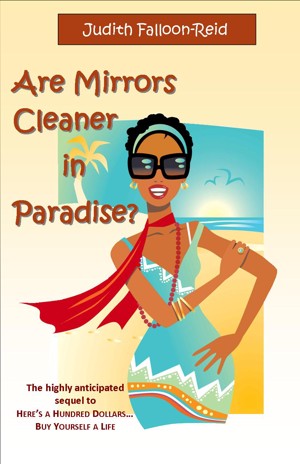 Are Mirrors Cleaner in Paradise?

By judith falloon-reid
Anne Marie finds herself facing the challenges brought on by her own life choices. Her romantic weekend with long time lover takes many unexpected turns when she finds herself in the midst of a hurricane. But the turmoil is not only in the weather as Anne Marie rides an emotional roller-coaster that places her on a collision course with family & friends and her inner self. More
The highly anticipated sequel to
HERE’S A HUNDRED DOLLARS...BUY YOURSELF A LIFE!

In 2011 Judith Falloon-Reid delighted her readers and made new fans with her bestselling novel Here’s a Hundred Dollars…
Buy Yourself a Life! The ‘fictional reality’ novel had readers laughing, crying, screaming with frustration and joyous with triumph.

In the highly anticipated sequel, Cecile’s artistic, fun-loving friend, Anne Marie finds herself facing the challenges brought on by her own life choices. Her romantic weekend with long time lover, Stan, at a luxurious tropical resort takes many unexpected turns when she finds herself in the midst of a hurricane. Faced with a difficult decision, Stan must confront the issues in his relationships that threaten to destroy the delicate balance he had built over many years. But the turmoil is not only in the weather as Anne Marie rides an emotional roller-coaster that places her on a collision course with her family and friends as they guide her towards deep introspection.
Available ebook formats: epub mobi pdf rtf lrf pdb txt html
First 20% Sample: epub mobi (Kindle) lrf more Online Reader
pdb
Price: $0.99 USD
Buy Add to Library Give as a Gift
How gifting works
Create Widget
Tags: romance women relationship adult fiction fiction adult romance
About judith falloon-reid

Judith Falloon Reid is a missionary at heart whose free spirit has led her into the lives and homes of many hurting people as a ministry worker, writer and speaker. Professionally, she is a marketing consultant with over 30 years experience.

Born and raised in Jamaica, Judith is the founder of Independent VoYces Literary Fair, a founding member of Jamaica Drums 4 Peace movement and is the host of the weekly Gospel television show, Gospel Rhythms which airs on FLOW TV. She is an active volunteer for the Jamaica Youth for Christ, where along with her husband, Michael Brown, they facilitate the drama ministry.

Judith and Michael own BarriVision Productions. She is the executive producer of four television shows, some airing locally and others overseas, Where in JA is Dry Lan’ Touris’, My LiKKle Food Spot, and Gospel Rhythms.

Judith is the author of four books:
Here's a Hundred Dollars...Buy Yourself a Life
Aaah-Inspiring Antarctica. A Ajamaican on Ice
Time & Seasons: A Layman’s Guide to Overcoming Tragedy, Xulon Press ©2003
Full Circle: Reclaiming Your Faith, Wingspan Press ©2007.
She has authored several Christian plays and monologues which have been performed to audiences in both South Florida and Jamaica including:
Just Another Friday
The Gift
And on the Third Day
Through My Eyes
A Black Man Looks Back
I Was There

She served as the local St. Ann correspondent and frequently wrote opinion columns for The Gleaner in the early nineties under the pseudonym Rosie Clark. She was also a frequent contributor to the Tourist Guide and Vacationer, no longer in publication. She published the first walking guide to Ocho Rios in 1992.

She migrated to South Florida in 1994 with her two children and founded the Christian Churches Monthly Magazine which published from 1998-2006. She established and directed ByHisWord Outreach Ministries, a multi-faceted outreach ministry in South Florida and ByHisWord Theatre Company, a youth outreach that used the arts as a ministry tool. These ministries led missions to various parts of Florida and the Bahamas. While in Florida, Judith wrote for several travel publications and a weekly column for the South Florida Times Newspaper for several months until returning home to Jamaica in 2009.

In 2010 she established the Independent VoYces Literary Fair.

Reviews of Are Mirrors Cleaner in Paradise? by judith falloon-reid

You have subscribed to alerts for judith falloon-reid.

You have been added to judith falloon-reid's favorite list.

You can also sign-up to receive email notifications whenever judith falloon-reid releases a new book.