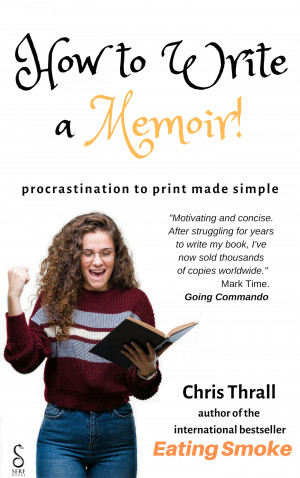 How to Write a Memoir - Procrastination to Print Made Simple

By Chris Thrall
Have you ever wanted to write a memoir? With easy-to-understand instruction and a pragmatic approach, this ebook encourages you how to stop procrastinating and complete your manuscript, giving insight into the art of good writing as you progress from a bestselling self-taught author. Please note: It is not intended to be a comprehensive grammar, punctuation or stylistic guide.
Download: epub mobi (Kindle) pdf more Online Reader
lrf pdb txt
Price: Free! USD
Add to Library
Create Widget
Tags: memoir biography editing editing your manuscript edit your book fiction editing selfediting writing a biography biography writing how to write a memoir editing your manuscript memoir writing memoir guidebook publishing a memoir
About Chris Thrall

Chris Thrall was born in South-East London. Aged eighteen, he joined the Royal Marines Commandos. Following active service in the Northern Ireland Conflict and training in Arctic warfare and survival, he earned his parachutist’s ‘wings’ and operated as part of a high-security detachment on board an aircraft carrier.

In 1995, Chris moved to Hong Kong to oversee the Asia-Pacific expansion of a successful network-marketing operation he’d built part-time while serving in the forces. Six months later, he was homeless, in psychosis from crystal meth addiction and working as a nightclub doorman for the 14K, Hong Kong’s most ruthless triad brotherhood.

In 2011, Chris wrote the internationally bestselling memoir Eating Smoke, a frank, disturbing yet often hilarious account of his experience. He has spoken on numerous podcasts, radio and television programs and has co-produced two award-wining radio plays on his life and memoir. Forty Nights, Chris’s 2019 follow-up, details how he used chronic addiction as a springboard to achieve every single one of his life’s goals.

A qualified pilot and skydiver, snowboarder and ultra-runner, Chris has backpacked through all seven continents and run a sub-four London Marathon. In 2018, he ran an ultra-marathon every day for 37 days, 999 miles from John O’Groats to Land’s End, solo, unsupported and carrying 14kgs of camping equipment, to raise awareness of veterans’ suicide and £18,000 for the Baton charity.

In 1999, Chris firewalked 120 metres over red-hot coals to raise money to work with street children in post-war Mozambique. He has driven aid workers from Norway to India and back on a 1978 British Leyland bus, dived off the cliff in Acapulco, fished for piranhas in the Amazon, scuba-dived with bull sharks in Belize and leopard seals and icebergs while exploring the Antarctic Polar Circle.

For his humanitarian approach to life, Chris was awarded the Second Level Commendation of the Finnish Nation on the grounds of human generosity. He has a degree in youth and community work and is a substance-misuse and addiction specialist. He currently lives in Plymouth, England, where he still intends to become an astronaut, a dolphin trainer or the Milky Bar Kid.

For motivational/informative speaking, podcasts and interviews, or if you would like addiction advice, life-coaching or writing mentoring, please send an email.

'Eating Smoke' - a memoir
"Chris Thrall left the Royal Marines to find fortune in Hong Kong, but following a bizarre series of jobs ended up homeless and in psychosis from crystal meth addiction. He began working for the 14K, a notorious Hong Kong triad syndicate, as a nightclub doorman in the Wan Chai red-light district." "This year's best book." - Time Out

You have subscribed to alerts for Chris Thrall.

You have been added to Chris Thrall's favorite list.

You can also sign-up to receive email notifications whenever Chris Thrall releases a new book.