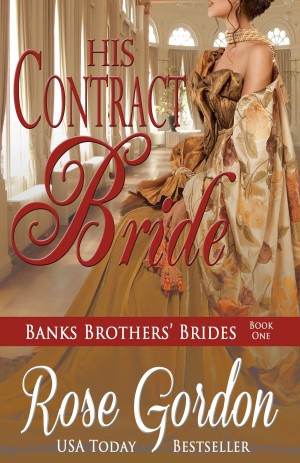 Rated 5.00/5 based on 2 reviews
Edward Banks, Lord Watson has known most of his life that one day Regina Harris was to be his bride--but somebody forgot to inform her... More
An avid academic and aspiring scientist, Edward is pleased to find that he won’t have to bother with the nonsense involved in courting a young lady.

Young and naive, it doesn't take much for her social-climbing father to convince Regina the gentleman she's to marry has requested her hand out of love, but devastates her when she learns the truth.

Now, it's up to a gentleman who's more comfortable in a conservatory than a drawing room to prove to Regina that she's more than just the proverbial sacrificial lamb that helped gain her family their foot in Society's door and that he--if no other gentleman--is trustworthy. But he just might be the one doing the learning as he'll be forced to acknowledge that sometimes the most combustible elements aren't the ones you control, but sometimes the ones you don't.

His Contract Bride by Rose Gordon
Bank Brothers Brides Book 1
Regina Harris has not had an easy life. Her mother died when she was young and she couldn't seem to please her father in anything she did. Her family was in trade and had wealth but not status in the Ton. The one thing her father craved and would do anything to get it….even using his daughter. While away at school one day changed Regina’s life. Her friend Sophie’s brother came for a visit along with his handsome friend. After meeting Edward Banks no other men could meet her expectations through out her season.

Edward Banks, Lord Watson, was so glad he didn't have to look for a bride. He preferred studying plants over women. Now that his father passed away it fell upon Edward's shoulders to marry and have an heir, even at his young age of twenty. He was happy with the woman who would be his wife, she was beautiful and seemed pleasant enough. One problem….Edward just didn’t get around to telling her about the marriage contract. Could one little omission make a difference?

I enjoyed returning to historical England and seeing the beginning of the Bank’s family and others. Seeing the young John as a rascal, meeting the woman who gave birth to someone like Lady Olivia and finally the answer to the Watson Townhouse in London and it’s unique decor. Rose Gordon once again flawlessly brings you into her book where the emotions flow from the pages to your heart. The laughter and tears along with the giggles to see what new words Rose has discovered in describing the anatomy. All these books are connected starting with the Scandalous Sisters series and than the Groom Series.
**Sexual situations within marriage.
http://justjudysjumbles.blogspot.com/...