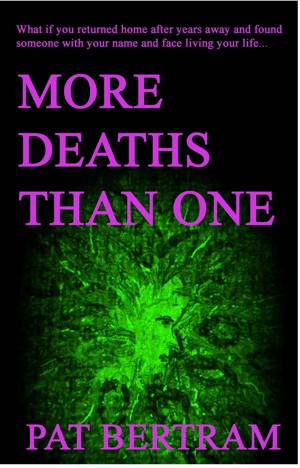 More Deaths Than One

By Pat Bertram
Rated 4.00/5 based on 2 reviews
Bob Stark returns to Denver after 18 years in Southeast Asia to discover that the mother he buried before he left is dead again. He attends her new funeral and sees . . . himself. Even worse, two men who appear to be government agents are hunting him for no reason that he can fathom. With the help of a baffling young woman Bob meets in a coffee shop, he uncovers the unimaginable truth.
Available ebook formats: epub mobi pdf rtf lrf pdb txt html
First 30% Sample: epub mobi (Kindle) lrf more Online Reader
pdb
Price: $4.99 USD
Buy Add to Library Give as a Gift
How gifting works
Create Widget
Tags: romance thriller crime suspense mystery death paranormal conspiracy thailand colorado vietnam mind control identity theft denver conspiracy theory conspiracy thriller conspiracies conspracy dopplerganger
About Pat Bertram

Reviews of More Deaths Than One by Pat Bertram

In More Deaths Than One, Pat Bertram has woven an intriguing tale of what can happen when the wrong people are given control over another’s life.


Our hero, Bob Stark, is mostly notable for his very essence of being un-notable. In fact, he is so un-notable that even the people who know him seem to have trouble recognizing him when they first see him. This very plainness draws you in, making you like him for his simplicity and empathize with him for that unwanted feeling of invisibility that we all share at times.

His ordinariness also proves to be essential to the story. In fact, his very plainness plays you right into believing the possibility of the truth that comes out later in the story. You’ll have to read the story to find out why.

The story starts with the very ordinary Bob Stark having a very ordinary hot chocolate in the Rimrock Coffee Shop, where his solitude is intruded on by his waitress making a rather ordinary attempt at flirting with him.

Unfortunately for Stark, the ordinariness of his life ends there.

Stark learns from the newspaper that his mother, Lydia Stark, has passed away – again. Yes, after burying his mother once already, the woman apparently has died a second time, 22 years later.

Convinced it has to be a hoax, Stark decides to show up for his mother’s second funeral.

All the usual people are at the funeral, friends and family, including Stark’s old college girlfriend Lorena Jones. Stark watches the funeral as an outsider only to find himself with more than one shock. Not only does the funeral appear to be entirely real, the man his old girlfriend is with comes as a big shock too. Bob Stark finds himself staring at none other than Bob Stark. But how can this be? How can he be watching himself at his own mother’s second funeral?

Stark soon finds himself pulled along an inevitable series of events, his newly befriended waitress Kerry Casillas at his side.

Stark’s search for the truth draws him deeper into a web of secrecy, and deeper into danger as the pair find themselves trying to stay one step ahead of someone who seems intent on catching them.

He soon learns that the road to the truth lies in his own past, a past he in part has to rediscover as if learning it for the first time.

Bob and Kerry travel to Thailand in search of answers that lead only to deeper questions.

The answers to the mystery prove to be as shocking as looking at yourself at your own mother’s second funeral.


More Deaths Than One is published by Second Wind Publishing, LLC.

This was an interesting read. It definitely showed the author's love and understanding of the culture she was featuring. The story pulled me along wanting to know what was going to happen, and the leads were very dynamic -- particularly Kerry. I enjoyed the book, though I really wanted to see the action in the epilogue instead of just be told it. All in all, a good introduction to Ms. Bertram's writing.

You have subscribed to Smashwords Alerts new release notifications for Pat Bertram.