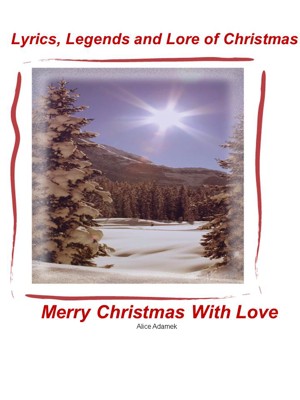 Lyrics, Legends and Lore of Christmas

Alice Adamek was born, Alice E. Lamphere in Miles City, Montana, at high noon on December 15, 1944. Alice was the first child of her mother and the fourth of her father. Due to family businesses in many states, her home is where she hangs her hat.
One of her father’s businesses was a saw mill in Minnesota. She has fond memories of sliding down the mountains of saw dust piles on a slab of cardboard. It was here that she got her first toy from Santa – a one-foot long piece of 2x4 with a face painted on it and a scarf tied around the “head,” plus another wound around the middle to make a skirt. She dearly loved it and carried it around for two years.
Of the horse ranch in Montana, her only wish was to get big enough to get off the stinky horses, move to a big city, and ride motorcycles. Her explanation, “The motorcycles don’t smell bad!” She not only rode them, but raced them.
She is the mother of two adult girls. Alice, at the time of this publication, lives in Colorado. That, of course, is subject to change at a moment’s notice, as Alice possesses an insatiable curiosity about the world and a wandering spirit.
As a child, she received training in various religions. Relatives practiced the Nazarene, Mormon, Methodist, Lutheran, and Catholic faiths. Included in the group of relatives are two Nazarene preachers and a deacon in the Mormon Church. Attending all of these different religious services opened her eyes to a vast range of religious beliefs, most based upon the Bible. As an adult she expanded her studies to include Buddhism, the Mayan culture, Judaism, Islam, Hinduism, Confucianism, and Shinto, the indigenous faith of Japan.
All of her reading and study led to an understanding of Christmas traditions and beliefs and their development over time in different countries and cultures. The Christmas that we have all come to know and love has many influences - some from very ancient times and what you read here is a gathering of information culled from over forty years of research.

You have subscribed to alerts for Alice Adamek.

You have been added to Alice Adamek's favorite list.

You can also sign-up to receive email notifications whenever Alice Adamek releases a new book.