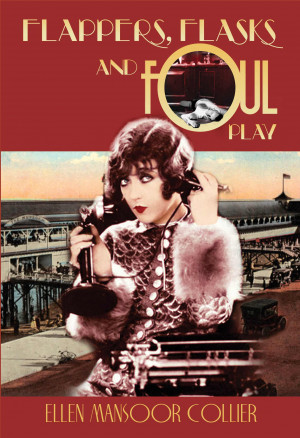 Jasmine Cross, a 21-year-old society reporter, feels caught between two clashing cultures: the seedy speakeasy underworld and the snooty social circles she covers in the Galveston Gazette. During a night out with her best friend, Jazz witnesses a bar fight at the Oasis--a speakeasy secretly owned by her black-sheep half-brother, Sammy Cook. But when a big-shot banker with a hidden past collapses there and later dies, she suspects foul play. Was it an accident or a mob hit?

Ellen Mansoor Collier is a Houston-based freelance magazine writer whose articles and essays have been published in several national magazines including: FAMILY CIRCLE, MODERN BRIDE, GLAMOUR, BIOGRAPHY, COSMOPOLITAN, COUNTRY ACCENTS, PLAYGIRL, etc. Several of her short stories have appeared in WOMAN'S WORLD. A flapper at heart, she’s the owner of MODERNEMILLIE on Etsy, specializing in Deco to retro vintage items. Formerly she's worked as a magazine editor, and in advertising and public relations. She graduated from the University of Texas at Austin with a degree in Magazine Journalism and was active in WICI, serving as President her senior year, as well as the campus magazine UTmost. During college, she worked as a cocktail waitress one summer, a short-lived experience. FLAPPERS, FLASKS AND FOUL PLAY is her first novel, followed by BATHING BEAUTIES, BOOZE AND BULLETS, GOLD DIGGERS, GAMBLERS AND GUNS, VAMPS, VILLAINS AND VAUDEVILLE and DECO DAMES, DEMON RUM AND DEATH, inspired by real-life rival gangs, historical events and Galveston landmarks and legends.

Fantastic! This book really brings to life Galveston's glamourous past in a way that feels authentic and realistic. The mystery sucks you in immediately and leaves you fretting for the characters until the very end!

Flappers,Flasks and Foul Play is a well thought out mystery with twists and turns that will keep the reader wanting to turn the page. It's location Galveston, Texas during the 1920's takes you back in time during prohibition letting the reader imagine what times were like. Jasmine or Jazz as she's called is a curious reporter who works at the Gazette writing stories on high society and fashion. She is always looking for a story with a 'punch', literally. The book takes off right away with suspicion of murder when Jazz witness' a bar brawl and the end result is a man lying on the floor motionless. Have a good read with Flappers, Flasks and Foul Play. The book will have you in suspense all the way through!