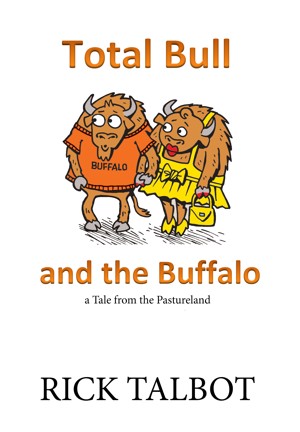 Total Bull and the Buffalo

By Rick Talbot
Total Bull is a hard-working fellow from the big Cow City. But for all his hard work (a wife, a mortgage, a car) he feels like something is just missing from his life. So he decides to go on a journey of discovery. Along the way he meets the mythical and mysterious Buffalo civilization.
Download: epub mobi (Kindle) pdf more Online Reader
rtf lrf pdb txt
Price: Free! USD
Add to Library
Create Widget
Tags: cow native american character newage religion and spirituality buffalo bisons animal characters
About Rick Talbot

Rick Talbot was born in Toronto, Canada. He grew up in the Saint James Town public-housing project, the most densely populated neighborhood in Canada. It was a community of contrasts and simultaneous hope and hardship among twenty-five thousand isolated elderly, mentally ill, new immigrants, and blue-collar families who lived side-by-side in a .27 square kilometer city block.

He started writing stories in elementary school, when his love of stories was nurtured by his parents. His first story was about a man named “electro” who had the power to control the electroweak force. Other interests were comics, books, movies, and the Commodore 64 computer.

He attended a Catholic elementary school, which instilled an early reverence for the Church. This was challenged by certain events, such as the time it was discovered that one of the priests whom had presided over his Confirmation ceremony was actually an impostor.

In high-school he wrote for the school newspaper and for a short time published his own underground tabloid of journalism, gossip, fiction and poetry. He became interested in music on a dare: to learn to play an instrument over the summer in order to go on a band trip to Chicago. This dare eventually led him to receive a Bachelor of Music degree at the University of Toronto.

After graduating from university he started writing about the emotional and existential struggles of growing up. This work sat in a drawer for four years before editing began. A few years later it became his 2013 debut novel Breaking Young Divinities, a fictional account about coming-of-age in the public housing projects of Toronto.

He is currently working on a series to follow-up Breaking Young Divinities.

You have subscribed to alerts for Rick Talbot.

You have been added to Rick Talbot's favorite list.

You can also sign-up to receive email notifications whenever Rick Talbot releases a new book.