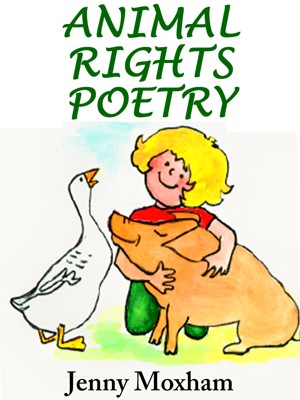 These 25 poems were written to inspire kindness and compassion for animals and to raise public awareness about the routine suffering inflicted on them at the hands of man. The poems will hopefully inspire readers to take up the cause for animals. More
Longtime vegan and animal rights campaigner, Jenny Moxham proudly presents Volume 2 of insightful Animal Rights Poetry.

These 25 poems were written to inspire kindness and compassion for animals and to raise public awareness about the routine suffering inflicted on them at the hands of man. The poems are written in an easy style and will hopefully inspire readers to take up the cause for animals.

Included in this book of poems are the following:
They Will Never Know A Spring
Would You Eat Your Dog For Christmas
What is Baby Drinking?
It Just Isn't Fair
The Week Before Christmas
A Christmas Prayer For Animals
Carols By Candlelight
How Did We Get It Wrong?
It's Only Natural
Autum Grey
Babes To The Slaughter
Happy Christmas
Animal Love?
Backyard Birds!
Backyard Dog
Murder On His Mind
Mankind?
Man or Mouse
How Would You Feel?
Fireworks Show
Walk Away From Meat
World Animal Day
Peace on Earth?
Retarded Research
Not Everyone Loves Christmas
Download: epub mobi (Kindle) pdf more Online Reader
rtf lrf pdb txt
Price: Free! USD
Add to Library
Create Widget
Tags: poetry pets animals poems rights vegetarian animal rights vegan peta
About Jenny Moxham

Jenny Moxham has been a vegetarian since 1977 and a vegan since 1979. She became converted' to vegetarianism after being saddened to see a truck load of cattle bound for slaughter and shortly afterwards, discovering that meat wasn't required for a healthy diet.

She tries to alleviate animal suffering whenever and wherever she can and writes lots of letters to the newspapers on issues concerning animal exploitation/cruelty and vegetarianism. She has put up library displays, taken humane education kits to local schools, attended demonstrations, designed animal-friendly Christmas cards, organized a campaign to have councils stop celebrating with fireworks and worked on on getting compassion for animals into the schools and churches in her area.

Her first poem was written after walking down the street one Spring day and rejoicing in the beauty all around her... and then realizing that millions of incarcerated factory- farmed animals will never know a Spring. She went home and wrote, They Will Never Know A Spring.

After that, various situations/events inspired her to write further poems.

Her song, A VOICE FOR THE ANIMALS won the Animal Liberation National Animal Rights Song competition in 2000 and her poems have been published in various magazines and newspapers. 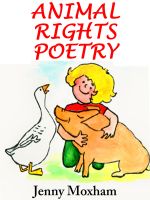 You have subscribed to alerts for Jenny Moxham.

You have been added to Jenny Moxham's favorite list.

You can also sign-up to receive email notifications whenever Jenny Moxham releases a new book.